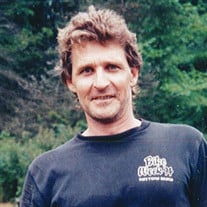 Allen M. Michaels, 61, of Mentor, was called upon by the angels on Friday, July 2, 2021 at Lake West Medical Center. He was born December 15, 1959 in Euclid, Ohio. Whether it was his astonishing good looks or his indisputable charm, Allen was able to make friends with anyone he encountered. He was loved by everyone, his laughter was contagious and he had an unwavering zest for life. He always found pleasure in camping, fishing (even when Jamie out fished him) and spending any amount of time outdoors. If he wasn’t outside, it wasn’t a secret that he loved his Western movies. He also loved music. He could walk into any room and burst into song without hesitation. On the dance floor he and his wife, Suzanne were a force to be reckoned with. As he would say, they really knew how to “shake a leg” and they always ruled the floor. The best way to describe my dad was as a family man. He was strong mentally and physically, resilient, a selfless provider, and he was an all-around classy yet rugged man. He was always handy and if he didn’t already know how to do something, he would always figure it out, the right way! He was proud to be a Michaels; he would always say “we’re born leaders”. Dedicated to keeping my mom and me happy, if we were happy, that meant he was happy. He also often served as a confidante to his brothers and closest friends. Aside from fatherhood, his life calling was truck driving. From the age of about eighteen, he had traveled long and far within the United States and knew all of the best routes to get anywhere. If not, he would pull out his trusty Atlas, along with two pairs of his reading glasses. Allen was a jack-of-all trades but by far he would say that his greatest accomplishment was me, his daughter, his “Sunshine”. Any time he could get the chance, he would tell anyone about how proud of me he was. Because of you, daddy, I am the strong, resilient, independent and driven leader that I am today. All of the best parts of you, are within me. I promise to continue to make you proud every moment of every day, until we meet again. Survivors include his devoted wife, Suzanne Michaels (nee: Kettlewell); loving daughter, Jamie Lee Michaels; siblings, Helga (Tom) Hogya, Paul Michaels and Erik (Helen) Michaels and many nieces, nephews and other loving family members. Preceding Allen in death are his mother, Anna (Harry) Michaels Lybarger; father, Walter Michaels and brother, Walter “Walt” Michaels. A private family gathering was held for close family and friends. His wishes were to be cremated and his wife and daughter will be spreading his ashes along Route 66. That’s right, road trip! Arrangements entrusted to the Brunner Sanden Deitrick Funeral Home & Cremation Center, 8466 Mentor Ave., Mentor, OH 44060. Offer condolences at www.brunners.com.

Allen M. Michaels, 61, of Mentor, was called upon by the angels on Friday, July 2, 2021 at Lake West Medical Center. He was born December 15, 1959 in Euclid, Ohio. Whether it was his astonishing good looks or his indisputable charm, Allen... View Obituary & Service Information

The family of Allen M. Michaels created this Life Tributes page to make it easy to share your memories.

Send flowers to the Michaels family.