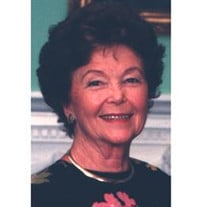 Ann Krouskoff Bell passed away peacefully on January 30, 2021. She was born in New Rochelle, New York on March 9, 1927. She was a cute, curly haired child with a button nose, who was asked to pose for Norman Rockwell and won a Shirley Temple look-alike contest. While attending St. Gabriel High School, Ann met her future husband, Gordon, as she walked up to her house in her red Lantz coat while he was there visiting with his aunt. He was smitten and the rest was history. She and Gordon were married after her graduation from the New Rochelle Hospital School of Nursing, where she was a member of the Army Nurse Corps. As she always told us, their wedding date of August 28, 1948, was the hottest day on record in New York City. They moved to Ottawa where Gordon attended medical school and she had three of their four children. Upon graduation, they moved back to the New York City area for Gordon’s internship and residency. After he finished, they moved their family (now numbering four children) to Lake County, Ohio, where Gordon began his surgical practice with Ann pulling double duty as his office manager and homemaker. They lived in Willoughby for six years until they moved to Waite Hill, where they spent the next 40 years. Ann wore many hats, excelling at everything she undertook. She was never afraid of hard work or getting her hands dirty. She loved their home in Waite Hill and maintained the property with great pride. She planted most of the gardens and trees, transforming a barren, seven-acre plot of land into a beloved setting for celebrations with family and friends, and most importantly, the childhood adventures of her grandchildren. Hours were spent mowing by hand and by tractor (often changing the oil and the blades herself). Ann painted and wallpapered every room in their home several times and even painted the exterior of the house by herself! When they sold their home, she found it necessary to compose a thick binder with everything the new owners would need to correctly maintain the property. She loved to sew, making curtains, drapes and upholstering furniture. She created beautiful outfits for herself, her daughters and granddaughters. She could make sandwiches and pies like no one on this earth, and she made the best Toll House Cookies until she changed the recipe and started using butter instead of Crisco! She was a master of ironing, folding and organizing and it was a great treat when she would come over and make sense of our lack of organization. She handled all the finances of the house, and made spreadsheets on her yellow legal pads that would rival any excel spreadsheet today. On top of all this, she was an amazing hostess! At the age of 65, when most people were retiring, she went to work as Gordon’s office manager for the next seven years, all the while tending to her duties at home. In addition to all this, she was a past president of what is now the Lake County Medical Alliance and was the fourth president of the Christ Child Society of the Western Reserve. She was a founding parishioner of the Chapel of the Divine Word, serving for many years as a lector. Ann was a wonderful mother, grandmother and great grandmother, and a great example to us. During the ‘70s when Women’s Liberation was in the forefront of the news, she said, “Maybe there’s something wrong with me, but all I ever wanted to be was a wife and mother”. Ann was a beautiful, strong, sweet, kind, funny, resilient and resourceful woman who was loved by all who knew her. She will be greatly missed. Ann is survived by “her girls”, Joanne (Don) Filipski and Janie (Bob) Nickodem, and her sons, Gordon (Kathy) and Allan (Lisa). Additionally, she is survived by grandchildren Katie (David) Leinweber, Gordon (Tara) Bell, Megan (Eric) Weidner, Moya (Eric) Dacey, Michael (Amy) Bell, David (Megan) Filipski, Bobby (Sarah) Nickodem and Alex (Kristi) Nickodem. She is also survived by 14 great-grandchildren and her sweet dog, Toto. Last, but not least, she is survived by her terrific older brother, Bob Krouskoff and his dear wife, Mona. Ann was preceded in death by her husband of almost 63 years, Gordon K. Bell, MD, her parents, Marie and Herman Krouskoff, and her brother, John Krouskoff. The family would like to extend their deep appreciation for the care she received from the staff at Vista Springs Quail Highlands, where she has lived for the past year and a half, and also to the team from Legacy Healthcare Services physical therapy, who have watched over her for 5 years with such concern. In addition, they are grateful to her neighbors in Newell Creek, her Bridge girls and the Merry Widows dining group who gave her such bright spots in her life after Gordon died. A Mass of Christian burial will be held on Saturday, February 27, 2021, at 11:00 am., at the Chapel of the Divine Word, 8100 Eagle Road, Kirtland, OH 44094. The Mass will be live streamed for those who wish to attend remotely at www.divinewordkirtland.org. Interment will follow in Waite Hill Village Cemetery. Masks are required and social distancing is encouraged during all publicly attended events. Remembrances may be made to the Christ Child Society of the Western Reserve. https://www.christchildwesternreserve.org/donate Arrangements entrusted to Brunner Sanden Deitrick Funeral Home and Cremation Center, 8466 Mentor Ave., Mentor, OH 44060.

Ann Krouskoff Bell passed away peacefully on January 30, 2021. She was born in New Rochelle, New York on March 9, 1927. She was a cute, curly haired child with a button nose, who was asked to pose for Norman Rockwell and won a Shirley Temple... View Obituary & Service Information

The family of Ann Krouskoff Bell created this Life Tributes page to make it easy to share your memories.

Send flowers to the Bell family.