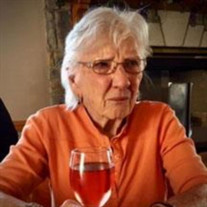 Arline Lyda (Johnson) Lipstreuer passed away February 25, 2021 peacefully at her home in Mentor, OH. She celebrated her 97th birthday on November 19, 2020. Born in Cleveland, OH, Arline attended Shore High School and graduated in 1942. During World War II, she served in the U.S. Coast Guard Reserve as the Drum Major of the Cleveland SPARS Drum and Bugle Corps. She held the rank of Musician 2nd Class beginning November 1944 and was honorably discharged in September 1945. Arline met her late husband, Kenneth G. Lipstreuer, while participating in the American Legion Euclid Post 343 Drum and Bugle Corps. They were married while Ken was on leave from service on August 14, 1944 (this year is still the hottest on record in Cleveland for that date). Arline worked at Halle’s Department Store, Thompson Ramo Wooldridge (the TRW Company) and, following the war, with the Veterans Administration. After settling in Euclid, Arline and Ken raised three sons and a daughter. During this time, Arline proudly served as a Cub Scout Den Mother for Euclid Pack #56 and volunteered as a Sunday School teacher at Faith United Church of Christ in Richmond Heights. She was also a professionally trained, talented cake decorator and was known throughout the neighborhood for her fantastic creations. In 1977, Arline began working for the newly opened Higbee’s Department Store at Euclid Square Mall, serving as a sales associate for many years in the Children’s Department. After she and Ken retired, they moved to Mentor, OH. Arline was preceded in death by her husband of 66 years, Kenneth, and her parents Victor and Grace (Walbourne) Johnson. She is survived by her four children; Kenneth Allyn (Corena) of Kingwood, TX, Jeffry William (Marilyn) of Bristow, VA, Gregory Dean (Mary Ann) of Painesville Township, OH, and Vicki Arline (Glen Goodwin) of Outing, MN; six grandchildren; Kensey, Morgan (Julien Legrand), Kevin, Jessie, Joshua, and Matthew; and one great-granddaughter; Olivia. Interment for Arline will be with her husband, Kenneth, at Ohio Western Reserve National Cemetery in Rittman, OH. Arrangements entrusted to Brunner Sanden Deitrick Funeral Home & Cremation Center, Mentor, OH. In lieu of flowers or donations, Arline asked each and everyone to hold your loved ones close and have a drink of the beverage of your choice in her honor. “Death leaves a heartache no one can heal, but love leaves a memory no one can steal.” Condolences may be offered at www.brunners.com.

The family of Arline Lyda (Johnson) Lipstreuer created this Life Tributes page to make it easy to share your memories.

Send flowers to the Lipstreuer family.