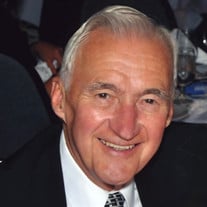 Charles “Chuck” E. Guenther, 88, of Kirtland, passed away at home, after a life well-lived, on Wednesday, May 4, 2022. Born March 11, 1934, in Cleveland, to the late Edward and Wilma Guenther, Chuck was a loving husband and father of three, and he will be missed by many. A child of the Great Depression, Chuck learned at a young age about the things that mattered most. His main passions were spending time with family and friends and pursuing leisure activities that made the best of those times. Chuck married the love of his life, Annette, in 1956 but was drafted by the Army within a month of their wedding. After serving two years, Chuck returned home to start his family and become “Employee #2” at a new business named Ohio Broach and Machine Company. Chuck’s work ethic was rarely matched, and he worked just as hard at home to finish his chores and ensure his weekends were free for family fun time. As an avid boater and cruiser, Chuck would pack up his Plymouth station wagon, the first new custom vehicle he ever bought, and head to Holiday Harbor Marina each Friday afternoon where he and his family spent weekends aboard their 34-foot Richardson, swimming and waterskiing on Lake Erie and cruising to favorite destinations like Bob-lo, Cedar Point, Middle Bass, and Put-In-Bay. Fishing for walleye and perch with friends Denny and Clare Parron was one of Chuck’s all-time favorite activities, but Chuck always knew the real catch was getting to spend time with the people he loved most. In addition to boating, Chuck was an avid golfer and skier. After boating season ended and winter set in, Chuck would wake before dawn to load up that same family station wagon, but this time with skis, boots, and sleepy kids, and head to Brandywine for winter weekend fun. Chuck likely never imagined all the memories he would create for his family in that wagon, including the time he drove them home from Killington, Vermont over bumpy mountain roads with Bryan laid out in the back, sporting the newly minted cast he earned after breaking his leg on the family ski trip. As an active skier, Chuck, Jr. carries on his dad’s legacy and shares the sport with others by coaching Special Olympics skiers each winter. Between working, boating, and skiing, Chuck still found time to coach his kids’ baseball teams. While he was most passionate about coaching Bryan’s baseball team and watching his son grow as a pitcher and shortstop, he also made time to coach third base at Kirsten’s softball games. Giving the kids the enthusiastic go-ahead sign to round third and head for home always brought a smile to Chuck’s face, knowing that the excitement of it all would fluster the opponents into making unforced errors and earning his team run after run! After becoming empty nesters, Chuck continued to enjoy boating with his wife, cruising with friends Bill and Carole Day, and enjoying more ice cream and laughs than seemed humanly possible. He and Annette also delighted in visiting their favorite casinos in Windsor and Las Vegas, taking family cruises with their adult children, and sometimes just enjoying the simpler things in life like watching the birds and wildlife in the park-like setting of their Kirtland home. Charles retired as Vice President of Manufacturing from Ohio Broach and Machine Company after 43 years of service. In 2011, he was preceded in death by Annette, his wife of 54 years. Survivors include his children, Charles (Lorrie) Guenther Jr., Bryan (Heleana Osredkar) Guenther and Kirsten (John Knoedler) Guenther, M.D.; grandchildren, Jonathan (Michelle), Lindsey, Jonathan, and Shawn Guenther; great grandchildren, Holden, Wyatt, and Lola Guenther; siblings, Sandra Kibort and Guy Guenther and many nieces and nephews. The family will receive friends from 10:00 a.m. – noon, Saturday, June 4, 2022, at the Brunner Sanden Deitrick Funeral Home & Cremation Center, 8466 Mentor Ave., Mentor, OH 44060. A funeral service will be held 12noon, Saturday, June 4, 2022, at the funeral home. Entombment will take place in All Souls Cemetery, following the service. Send flowers and offer condolences at www.brunners.com.

The family of Charles "Chuck" E. Guenther created this Life Tributes page to make it easy to share your memories.

Send flowers to the Guenther family.