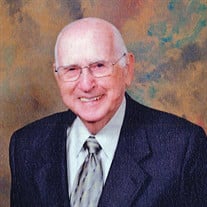 Clancy E. Strader, age 96 of Avon Lake, passed away Wednesday, October 13, 2021 at Solivita of Westbrook Place, Westlake, OH. He was born on January 11, 1925 in Wadsworth, OH to the late Clarence Sr. and Elberta Strader. Clancy was preceded in death by his beloved wife of 35 years, Doreen Strader. Clancy graduated from Seville High School in Medina County, Class of 1941 and served his country in the United States Marine Corps from 1943-1946. He went on to graduate from Kent State University in 1948. Upon graduation, he worked as a reporter for the former Cleveland Press while attending Law School at Cleveland Marshall School of Law, Class of 1954. Clancy opened his own law practice: Clancy Strader Law Office in Willowick and on January 1, 1960, he started Clancy Strader & Co., LPA in Mentor. He served as an assistant prosecutor for the Lake County Prosecutor’s Office. In 1962, he was elected Lake County State Representative. Clancy was voted outstanding freshman legislator by his peers and was re-elected in 1964. He retired from politics in 1966. During the late 1960’s, he served as the Law Director for the City of Mentor. He was a former Rotarian, former President of the Pine Ridge Country Club Board of Membership in Willoughby, and the former President of the Lake County Bar Association. Clancy sold his law practice and retired from the practice of law in the early 1980’s. Clancy was a member of Pine Ridge Country Club, Madison Country Club, and Myerlee Country Club in Ft. Myers, FL. After his retirement, Clancy and Doreen resided in Ft. Myers, coming to Ohio during the winter holidays to visit family. They were avid golfers and enjoyed travelling to Europe and the United Kingdom. A highlight for Clancy was kissing the Blarney Stone in Ireland and exploring the land of his ancestors. Clancy is survived by his children, Timothy Strader and Karen (John) Jereb; step-children, Linda (Mark) Piscioneri, Mark Mickshaw (deceased), and Jeffrey Mickshaw; grandchildren, Emma, Ashley, and Andrew Jereb; Brandon Mickshaw and Amber Vidmar. Private family service will be held at Mentor Cemetery. Funeral arrangements entrusted to the Brunner Sanden Deitrick Funeral Home and Cremation Center, Mentor, OH. In lieu of flowers, contributions in memory of Clancy may be made to the Alzheimer’s Association, Cleveland Area Chapter at www.alz.org/cleveland. Please offer condolences at www.brunners.com.

The family of Clancy E. Strader created this Life Tributes page to make it easy to share your memories.