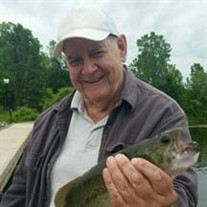 Clinton R. Gill, 75, of Willoughby, passed away Saturday, October 17, 2020 at his home, surrounded by his family. He was born at home November 30, 1944 in East Liverpool, Ohio to the late Clifford and Esther Gill. He met his future wife, Barbara at Bliss College in 1962. They were married in Michigan in 1964. After College, Clinton started his career at National City Bank in Cleveland where he worked for 43 years. Clinton was a member of the Cleveland Rose Society and Euclid Rose Society for many years. He raised chinchillas for pets and enjoyed gardening, golfing, bowling and fishing over the years. He was known to take trips and go gambling with several family and friends. Known to give the shirt of his back and enjoyed having coffee and conversation with friends. Survivors include his wife of 56 years, Barbara Gill (nee: Young); daughters, Bonnie (George) Tamura, Cheryl (Michael) Tyson and Mitzie (Terry Ginn) Atkins; grandchildren, Matthew (Crystal) Tamura, Brandon Tamura, Gregory (Angel Moore) Jenkins, Seth Atkins and Autumn Atkins; great grandchildren, Aurora, Alex and Oliver Tamura and Leeland Jenkins and many nieces, nephews and other loving family members. Preceding Clinton in death are his parents, Clifford and Esther Gill; siblings, Alice Malone, Leona Triner, Richard Gill, Margaret McDaniel and Alberta Glenndenning. The family will receive friends from 4:00 – 6:00 p.m., Tuesday, October 20, 2020 at the Brunner Sanden Deitrick Funeral Home & Cremation Center, 8466 Mentor Avenue, Mentor, Ohio 44060. A funeral service will be held 6:00 p.m., Tuesday, October, 20, 2020, at the funeral home. Mask are required and social distancing is encouraged during all publicly attended events. In memory of Clinton, contributions may be made to a cancer charity of ones choosing or to Hospice of the Western Reserve P.O. Box 72101, Cleveland 44192, donate online at www.hospicewr.org Send flowers and offer condolences at www.brunners.com.

Clinton R. Gill, 75, of Willoughby, passed away Saturday, October 17, 2020 at his home, surrounded by his family. He was born at home November 30, 1944 in East Liverpool, Ohio to the late Clifford and Esther Gill. He met his future wife, Barbara... View Obituary & Service Information

The family of Clinton R. Gill created this Life Tributes page to make it easy to share your memories.

Send flowers to the Gill family.