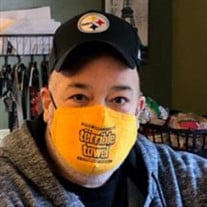 Danny L. Chandler, age 56, died November 6, 2021 at UH TriPoint Medical Center, due to complications from pneumonia. He was born November 18, 1964, in Ashtabula, Ohio. Dan was a lifelong Pittsburgh Steelers fan. He loved the “steel curtain” and Ben Roethlisberger, which is why he named his dog “Big Ben”. He would spend hours upon hours fishing and claimed to be the best angler around and loved to exclaim “fish on”! His other two favorite pastimes were scratching off instant lottery tickets and having “bonfires” where he would try to burn and blow up anything he could find. Survivors include his son, Adam Chandler (Taylor LeMaster) of Worthington; mother, Beatrice "Bea" Hedrick of Madison; sister, Melissa (Jim) Amspaugh of Mentor; niece, Jessica Amspaugh of Perrysburg; nephew, Joshua Amspaugh of Mentor; and former spouse, Lori Barch of Ostrander. Preceding Dan in death are his grandparents, Donald and Beatrice Francis Sr, Walter and Delma Chandler; father, Dan Chandler; and brother, Greg Chandler. A private family burial will take place in Lenox Center Cemetery. NOTE: HIS GRANDPARENTS, DONALD AND BEATRICE FRANCIS, AND HIS BROTHER, GREG, ARE ALSO BURIED IN THIS CEMETERY. Arrangements entrusted to the Brunner Sanden Deitrick Funeral Home and Cremation Center, Mentor, OH. Please offer condolences at www.brunners.com.

The family of Danny L. Chandler created this Life Tributes page to make it easy to share your memories.