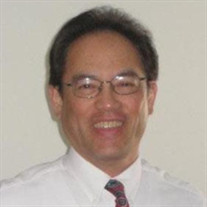 David M. Pon age 71 of Wickliffe, died Friday January 15, 2021 at Hillcrest Hospital, Mayfield Heights. He was born September 29, 1949 in Minneapolis, MN. David was a retired Senior Supply Chain Specialist from Eaton Aerospace. He graduated from Siena College in 1973 with his Bachelors of Business where he was a brother of Delta Sigma Pi. He later graduated from Lake Erie College in 1988 with his Masters of Business Administration. David grew up idolizing Bruce Lee and Charles Atlas. The love of his idols led him to enjoying wrestling, weight lifting, and all things health and fitness (including daily Fitbit challenges with his family). He had a love of sports and shared his father’s lifelong love of the Ohio State Buckeyes and Baltimore Orioles. David was a first-generation Chinese American who prided himself on hard work, savings, and the ability to help those he loved. David was humble, generous, and an eternal optimist, who never complained and always wanted to support his family. He was a religious blood bank donor and volunteer for MedWish. David was the most outgoing in his family and enjoyed family gatherings with his siblings, where he often evoked smiles and laughter while sharing their favorite Chinese food. He looked forward to annual July 4th cookouts with his daughter and son-in-law as well as weekly phone calls with his beloved Mother. David will forever be missed and will always be remembered as a cherished son, brother, godfather, uncle, and father. Survivors include his daughter, Samantha (Michael) Connelly; mother: Eugenia Pon; siblings: Rowena (Bill) Muehlenhard; Elaine Pon; Jon (Aggie) Pon; Chris (Becky) Pon; Mark Pon; god-daughter, Meghan (Chad) Westbrook; nieces and nephews: Damira (Andy) Kainz; Dana Pon; Daren (Becky) Pon,; Derek Pon; McKenzie Pon; and Lily Muehlenhard; former wife: Carol Cruise; and grand-dog: Daisy May. Preceding David in death are his father, Richard Pon; and dog: Duffy. Family requests contributions may be made to the American Red Cross https:///www.redcross.org/donate/donation.html/ in support of blood services. Arrangements entrusted to Brunner Sanden Deitrick Funeral Home & Cremation Center, 8466 Mentor Ave., Mentor, OH 44060. Please offer condolences at www.brunners.com

The family of David M. Pon created this Life Tributes page to make it easy to share your memories.

Send flowers to the Pon family.