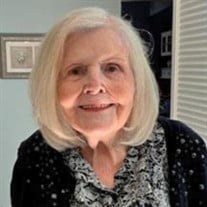 There’s a lot of laughter in heaven today. Della Woyma has arrived. Della (nee Mannion) Woyma, age 90, of Mentor, died peacefully at the home of her daughter Margaret (Peggy) and son-in-law Michael Santarelli on Monday, December 21, 2020. Della was born on December 15, 1930, in Cleveland. For the past year, Peggy and Michael had lovingly cared for her in the Lyndhurst home that years ago had been the residence of Della and her husband, John Woyma, who passed away in 1994. It was there and in other homes in Cleveland, Euclid and Mentor that Della and John shared countless laughs and holiday gatherings with their five daughters and large extended family. Della was the perpetual life of the party, from leading the conga line at her grandchildren’s wedding receptions to repeating her favorite jokes. She often would laugh so uproariously that tears streamed down her cheeks and the ending of the story would be drowned in gibberish, but it was of no matter; everyone knew the ending already, and their joy was as much a consequence of seeing her delight in telling it yet again as it was of hearing the elements of the joke itself. The Irish beauty of their neighborhood on Cleveland’s East Side, Della met her very Slovak husband when she was still a teenager. For 45 years, they presided over a lifetime of happy memories. After John’s death, Della and her eldest daughter, Anne Marie, continued to welcome friends and family to the Woyma home in Mentor, hosting joyous gatherings replete with Della’s famous cooking for another quarter century. A graduate of East High School, Della worked as a typist and was a faithful volunteer while her daughters were students at Villa Angela Academy. She was an active member of Saint Felicitas Parish, Euclid, where Anne served as school principal. She is survived by daughters Anne Marie, Della (Richard) Osborne, Peggy (Michael) Santarelli, Barbara (Joseph) Gill, and Mary Warrell, 13 grandchildren, 24 great-grandchildren, sisters Ann Boland, Margaret Perpar and Ruth Piscsalko, and many nieces and nephews. In addition to her husband, she was preceded in death by their daughter Therese, great-grandson Christopher, parents James and Marie Mannion, sister Patricia Campbell, and brothers Wilfred (Willie) and James Mannion. A funeral mass in memory of Della will be held 10 a.m. Monday, December 28, 2020, at St. John of the Cross Parish, 140 Richmond Rd., Euclid, OH 44143. (Please meet at the church.) Interment will be in All Souls Cemetery, Chardon. In lieu of flowers the family requests contributions be made to a charity of one’s choice. Please offer condolences at www.brunners.com.

The family of Della M. (Mannion) Woyma created this Life Tributes page to make it easy to share your memories.

There’s a lot of laughter in heaven today. Della Woyma has arrived....

Send flowers to the Woyma family.