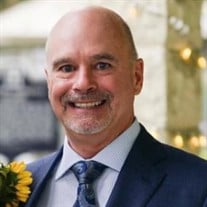 Donald C. Fulton, age 66 of Mentor, passed away Wednesday, March 17, 2021 at home. He was born June 10, 1954 in Cleveland, OH to the late Malcolm Fulton and Dorothy Roppell. Dad worked for Karpinski Engineering as a mechanical HVAC system specialist. He loved sharing his knowledge in the field to support the engineers in designing mechanical building HVAC systems. His work ethic was something to be desired. He prided himself on his work and providing for his family. He was a problem solver personally and professionally. He was the lender of advice and a Mr. Fix it. He was the one to call to fix an appliance, hang up a picture or adjust the HVAC. He wouldn’t rest until he had a solution. Dad will be remembered for his will to do anything for his kids (and grandkids). He was beyond proud of his family and would share pictures and stories of their accomplishments to anyone who would listen. He was truly their number one fan. From the times when he was coaching soccer, wrestling and little league, up until their adult lives where he continued to offer them advice and coaching. Survivors include his children, Natasha (Rusty) Dodge, Domonique (Sean) Allds, and Joshua (Tania) Fulton; grandchildren, Blakely and Bryce Dodge, Parker and Liana Allds, and Alexandria Fulton. The family will receive friends from 11 am – 1 pm, Saturday, April 3, 2021 at Brunner Sanden Deitrick Funeral Home and Cremation Center, 8466 Mentor Ave., Mentor, OH 44060. Inurnment will follow in Kirtland South Cemetery, Kirtland, OH. Masks are required and social distancing is encouraged during all publicly attended events. Contributions in memory of Donald may be made to the ALS Association Northern Ohio Chapter, 6155 Rockside Rd #403, Independence, OH 44131. Please offer condolences at www.brunners.com

The family of Donald C. Fulton created this Life Tributes page to make it easy to share your memories.