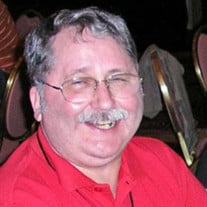 Donald Robert Lyman, age 67, passed away on January 12, 2021 at Tri-Point Medical Center, Concord Twp. He was born on September 8, 1953 in Akron, Ohio. During high school Donald played the tuba and was a member of the Ohio State Fair All-Boys Band in 1970. He graduated in 1971 from Westerville High School, Westerville, Ohio. For many years Donald worked as a manager at Conley’s Department Stores in Chardon, Elyria, and New Philadelphia, Ohio. He was living in Dover, Ohio when he decided to enlist in the US Navy. Because of his passion for computers, Donald waited 10 months in the delayed entry program so he could enlist in February 1985 with a Data Systems Technician designation. During his 20 year career Donald traveled to every continent except Antarctica. He spent more than 8 years total on sea duty, assigned to USS Kitty Hawk (CV-63), USS John F Kennedy (CV-67) and at retirement, USS Thach (FFG-43) homeported in San Diego, CA. His shore duty assignments included Reykjavik, Iceland; Pearl Harbor, Hawaii; and Bangor, Maine. He retired as an FC1(SW) in February 2005 and moved back to Mentor, Ohio to be near family. Donald had many passions throughout his life. His lifelong interest in physics led him to use his GI Bill to return to school. He graduated Magna Cum Laude from Case Western Reserve in May 2010 with a BA in Physics and a minor in education. For years Donald was a member of the Society for Creative Anachronism. He participated in role playing games in person and virtually, attended conventions, and Renaissance Fairs for more than 40 years. His fascination with dinosaurs inspired him to follow the Montana Dinosaur Trail a few years ago. Donald traveled a great deal while in the Navy and following retirement. Following in his father’s footsteps, Donald became a Ham Radio Operator and took over Dad’s old call sign, W8VJX, after Dad passed away. He also participated in National Novel Writing Month every November from 2011 to 2018. He is survived by his sister: Susan “Addy” (Jonathan) Haston and brother: Joseph Lyman. Donald was preceded in death by his parents: Robert and Betty Jeanne (Rhoads) Lyman, paternal grandparents: Joseph and Mary (Kline) Lyman, and maternal grandparents: Harry and Addy (Benjamin) Rhoads. A committal service with US Navy military honors will be held at a later date at Ohio Western Reserve National Cemetery, Rittman, OH. Arrangements entrusted to Brunner Sanden Deitrick Funeral Home & Cremation Center, 8466 Mentor Ave., Mentor, OH 44060. Please offer condolences at www.brunners.com

Donald Robert Lyman, age 67, passed away on January 12, 2021 at Tri-Point Medical Center, Concord Twp. He was born on September 8, 1953 in Akron, Ohio. During high school Donald played the tuba and was a member of the Ohio State Fair All-Boys... View Obituary & Service Information

The family of Donald Robert Lyman created this Life Tributes page to make it easy to share your memories.

Send flowers to the Lyman family.