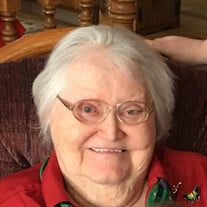 Dorine J. Mayer, age 84, passed away Saturday, October 31, 2020 at her home in Painesville Twp. She was born December 9, 1935 in Crawford County, Ohio. She had lived in Painesville Twp. for the past 45 years. For many years, Dorine and her late husband, Bob were avid “square dancers” in the Lake County area with the group called “Broken Wheel Squares”. Over the years, Dorine and Bob were able to take many trips together traveling to Japan, Australia, New Zealand, Alaska, Ireland, and many other exciting places. Dorine was known for her incredible painting ability, extravagant themes parties, and family reunions. With a twenty-foot spaceship hanging from a tree or a thirty-foot pirate ship, she made each family get together something to remember for a lifetime. Dorine spent thirty-five years working for the American Red Cross blood donor drives. Her generosity and willingness to help anyone in need is something we all should aspire to be like. Survivors are her children, Sheryl Chambers of Ohio and William (Melissa) Mayer of Ohio; grandchildren, Greg, John (Stephanie), David (fiancée, Angela), Michael (Allison), Kimberly, and Katlyn (Campbell); great grandchildren, Aniston, Ruby, Beckett, and Nathan (due in January). She is also survived by her sister, Kathleen (Kurt) Mikan of Georgia and son-in-law, Scott Schrumpf. She is preceded in death by her parents, Clinton G. (Doris) Kehrer; her husband of 58 years, Robert W. Mayer Jr., and her daughter, Theresa Schrumpf. Due to the pandemic, there will be a private family service held at a later date. Contributions in honor of Dorine may be made to the American Red Cross Lake County Chapter, 1016 Bank St., Painesville, Ohio 44077 Arrangements entrusted to the Brunner Sanden Deitrick Funeral Home & Cremation Center, 8466 Mentor Ave., Mentor. Offer condolences at www.brunners.com

Dorine J. Mayer, age 84, passed away Saturday, October 31, 2020 at her home in Painesville Twp. She was born December 9, 1935 in Crawford County, Ohio. She had lived in Painesville Twp. for the past 45 years. For many years, Dorine and her... View Obituary & Service Information

The family of Dorine J. Mayer created this Life Tributes page to make it easy to share your memories.

Send flowers to the Mayer family.