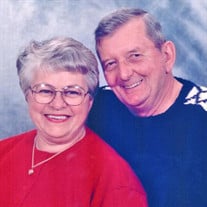 "Together Again" Dorothy Ann (nee Voll) Gilles, age 89 formerly of Mentor, passed away December 4, 2021 at Canterbury of Twinsburg. She was born March 27, 1932 in Cleveland, Ohio to the late Frank and Dorothy (nee Long) Voll. Dottie was preceded in death by her husband of 62 years, Richard Gilles, and her two brothers, Parker and Jack Voll. As did many mothers during the 50’s and 60’s, Dottie made clothes, both sewing and knitting, for her entire family. She then took the craft to the next level and was spinning and weaving wools which then evolved into hooking rugs and wall hangings. Dottie took this craft to the level that she was very proud of, the title given her of being the “happy hooker”. As was her nature, in addition to making ceramic dolls, she kept refining her craft to weaving computer generated patterned blankets and elaborate embroideries. Dottie raised her family in Mentor and Thompson Ohio, and once her sons were settled into their own families, she and Dick relocated to East Palaka, Florida off of the St. John’s River for 23-years. Shortly following Dick’s death in 2010, she relocated back north about 9-years ago to be closer to her sons. Her unassuming and generous nature was greatly cherished and will be sorely missed by all who knew and loved her. Dottie and Dick are survived by their sons, Mark (Laura) Gilles, Steven Gilles, Robert (Linda) Gilles, David (Jennifer) Gilles, and Michael (Tina) Gilles; many loving grandchildren and great-grandchildren; and brother, Robert (Trish) Voll. Private family services will be held. Inurnment with her husband will be in the Mentor Cemetery. Contributions may be made in Mrs. Gilles’s memory, in care of Continuum Care Hospice, 12380 Plaza Drive #102, Parma, Ohio 4413. Offer condolences at www.brunners.com.

"Together Again" Dorothy Ann (nee Voll) Gilles, age 89 formerly of Mentor, passed away December 4, 2021 at Canterbury of Twinsburg. She was born March 27, 1932 in Cleveland, Ohio to the late Frank and Dorothy (nee Long) Voll. Dottie was... View Obituary & Service Information

The family of Dorothy Ann (nee Voll) Gilles created this Life Tributes page to make it easy to share your memories.