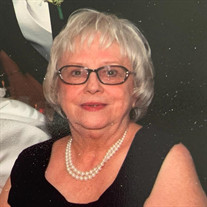 Dorothy J. Judge, age 89 of Mentor, passed away Monday, June 28, 2021 at her home with her family at her side. She was born on June 4, 1932 in Cleveland, Ohio to the late Dennis and May (Prusha) Taitt. Dorothy lived in Eastlake, Ohio where she graduated from Willoughby Union High School in 1950. She moved to Mentor, Ohio in 1953. She was the head majorette for the High School band and was lead vocalist in a local band in the late 40’s. She was employed by Ohio Bell after graduation as a long distance operator. Dorothy also worked the election polls at Fairfax Elementary in the 60’s and 70’s and enjoyed a good discussion of politics. After raising her family, she worked at May Co. where she retired in 1994. She was a sports fan of any season but truly enjoyed watching the Indians. Her children, grandchildren and great grandchildren were the true joy of her life. She was noted for her contagious laughter that lit up any room. Family vacations camping, Florida, and Kiawah Island, SC were also a favorite of hers. Dorothy loved reading. To be exact - we estimated she read over 8,516+ novels, biographies, and historic world events. Dorothy is survived by her husband of 68 years, Albert Judge, Jr.; daughters, Leighsa (Paul) Parisi-Delaney and Cynthia (Anthony Sedmak) Judge; grandchildren, Ashleigh (Conrad) Straube of Gilbert, AZ, Ryan (Ali) Parisi of Mentor, Adam (Amanda) Parisi of Painesville Twp, Patrick and Noah Delaney of Akron, Ohio and Lauren Klodt of Hartville, Ohio; great grandchildren, Madelynne and Conrad Straube, Alyvia Hadesh, Evan and Anthony Parisi and Windeler Parisi; sister, Lorraine Schupp; nieces, Pat Greene, Kathy Kanuk, Carole Scotese, Amy Hoffman; and nephew, John Schupp. She was preceded in death by her parents; brother-in-law, Lewis John Schupp; son-in-law, Mark E. Parisi; and granddaughter, Kendi Marie Parisi. Dorothy, you are having your butterfly mornings and daffodil afternoons for eternity now. A joint celebration of life gathering for Albert and Dorothy will be held 5-7 pm, Friday, October 8, 2021 at the Brunner Sanden Deitrick Funeral Home & Cremation Center, 8466 Mentor Ave., Mentor, OH 44060. The memorial service will begin at 7 pm on Friday at the funeral home. Private family burial will take place at Whitehaven Memorial Park. Arrangements entrusted to the Brunner Sanden Deitrick Funeral Home & Cremation Center, Mentor, OH. Contributions may be made in memory of Dorothy to the Lake Humane Society, 7564-E Tyler Blvd., Mentor, Ohio 44060. Offer condolences at www.brunners.com

Dorothy J. Judge, age 89 of Mentor, passed away Monday, June 28, 2021 at her home with her family at her side. She was born on June 4, 1932 in Cleveland, Ohio to the late Dennis and May (Prusha) Taitt. Dorothy lived in Eastlake, Ohio where... View Obituary & Service Information

The family of Dorothy J. Judge created this Life Tributes page to make it easy to share your memories.