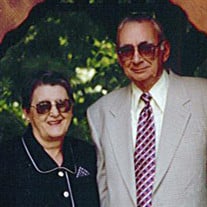 Dorothy A. Troha (nee Grosko), 93, of Concord Twp., passed away March 14, 2022 at her home with her family by her side. She was born August 16, 1928 in Cleveland to the late Joseph and Helen (nee Brodzinski) Grosko. Dorothy, better known as “Dot”, was a 1946 graduate of Collinwood High School. She worked for Ohio Bell as a long distance operator and as a guest services representative at the Red Roof Inn until her retirement in 1992. After her retirement, she volunteered as a heavenly duster at St. Gabriel’s Church in Concord Twp. On September 18, 1948, she married her beloved, Joseph Troha. They were married for 56 years until his passing in 2004. Dorothy loved her family very much and was a big fan of the Cleveland Indians. She and her family celebrated many of her birthdays at the Indians games. Dorothy also loved playing slot machines. Survivors include her children, Clare (Ronald) Montz, Sandra (Ted) Henry and William Troha; grandchildren, Sarah (Robert) Leopold, Amy (Robert Humberson) Montz and Anne (Will Fedele) Montz; and her great grandchildren, Mason, Ella and Liam. Dorothy also leaves behind those special friends, Cora, Marylyn and Jenny, who were there for her, especially when she became homebound. She was preceded in death by her husband, John “Joe” Troha; and her brother, James Grosko. A memorial mass in memory of Dorothy will be held 11 a.m. Thursday, March 24, 2022 at St. Gabriel’s Catholic Church, 9925 Johnnycake Ridge Rd., Concord Twp., OH 44060 (Please meet at the church.) Inurnment will be in All Souls Cemetery. In lieu of flowers, contributions may be made in Dorothy’s memory to St. Jude Children’s Research Hospital, 501 St. Jude Place, Memphis, TN 38105 or to the Deepwood Foundation, 8121 Deepwood Blvd., Mentor, OH 44060. Arrangements entrusted to the Brunner Sanden Deitrick Funeral Home & Cremation Center, 8466 Mentor Ave., Mentor, OH 44060. Please offer condolences at www.brunners.com.

Dorothy A. Troha (nee Grosko), 93, of Concord Twp., passed away March 14, 2022 at her home with her family by her side. She was born August 16, 1928 in Cleveland to the late Joseph and Helen (nee Brodzinski) Grosko. Dorothy, better known as... View Obituary & Service Information

The family of Dorothy A. Troha created this Life Tributes page to make it easy to share your memories.

Send flowers to the Troha family.