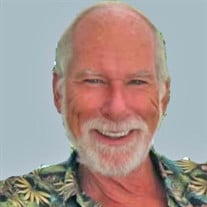 Doug McFarlin, age 80 formerly of Mentor and South Euclid, passed away June 8, 2022. He was born February 1, 1942 in Cleveland, OH to the late Robert and Marjorie (nee Wilson) McFarlin. Doug spent his early years in Chagrin Falls before moving to Rocky River where he graduated from Rocky River High School in 1961. After High School, he enlisted in the US Navy and spent 4 years from 1961-1965 aboard the aircraft carrier USS Forrestal. After his discharge from the Navy, Doug spent 40 years in the fastener industry. He was Vice President of Flexalloy, Inc and retired from Textron Fastening Systems in 2004. He was a longtime member of Mentor Lagoons Yacht Club and loved boating and fishing. He owned more than 10 boats over the years. Fishing was his passion; Doug fished all over the US and Canada, including numerous trips to Alaska and the Canadian Northwest Territories as well as the Carolinas and Florida. He was also an avid sports fan having played basketball for over 25 years. He would willingly watch almost any sport at any time. Doug left this final message to his family and friends: “Thanks, have a great life, and have fun. It goes by too quickly!” He is survived by his daughters, Melinda “Mindy” McFarlin and Julie Ann (David) Beers; grandchildren, Chelsea Rose Beers, Cameron Morgan Beers, and Caroline Elizabeth Beers; brother, Robert John (Annette) McFarlin II and other loving family. He was preceded in death by his wife, Irene (nee Hammerhofer) McFarlin and his parents. The family will receive friends for a celebration of life from 6-8 pm Friday, June 24, 2022 at the Brunner Sanden Deitrick Funeral Home & Cremation Center, 8466 Mentor Ave., Mentor, OH 44060. Please no formal attire, casual/resort wear is requested. In lieu of flowers, contributions may be made to The Foundation For Alcoholism Research at https://alcoholismresearch.org/ Offer condolences at www.brunners.com.

The family of Doug McFarlin created this Life Tributes page to make it easy to share your memories.

Send flowers to the McFarlin family.