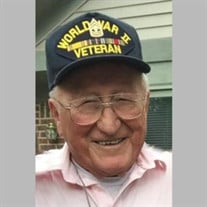 Edward J. Langa, 97, of Willoughby, passed away peacefully December 27, 2021 at his home. He was born April 18, 1924 in Cleveland. A U.S. Army WWII veteran who proudly served his country in General Patton’s 3rd Army in the European Theater, Edward (Ed) was a loving and devoted husband, father, brother, uncle, and friend to many. He will be deeply missed. Ed, one of seven children growing up in Euclid, enlisted in the Army shortly after his graduation from Euclid Shore High School (and the bombing of Pearl Harbor). Rising to the rank of First Sergeant, one of Ed’s greatest military accomplishments was the building of the longest floating Bailey bridge across the Rhine River. After the war ended, Ed came home stateside to marry his high school sweetheart and love-of-his life Winifred Fitzpatrick. Their undying love lasted nearly 71 years together. Ed cared for Winnie’s last six years on this earth in a nursing home—never missing a day except for his hip replacement surgery. Ed worked as a mechanical engineer almost his entire career for GE and AMAX Specialty Metals. In his later years with AMAX, he became the OSHA Health and Safety Director. Ed always enjoyed playing golf in the Annual Moly Open and stayed friends with so many of his co-workers long after his retirement. As avid athletes, Ed and Winnie ice skated, skied, golfed and square danced (Broken Wheels) almost their entire marriage while visiting so much of our beautiful United States and Europe. After retirement, Ed lent his passion for physical fitness to help develop and procure fitness equipment for the Willoughby Senior Center (Browning School) where he helped lead classes. Ed’s greatest passions in life were playing hockey, skiing, and playing guitar. Ed fearlessly played hockey well into his 40s. Ed was also a member of, and instructor for, the National Ski Patrol at the Cleveland Ski Club. After leaving sports behind, he regularly played guitar at the Willoughby Senior Center on Tuesday evenings. As a member of Bob Poling’s Country Grass Band, Ed visited countless nursing homes for many years spreading his love for country music to all who would listen. Survivors include his children, Dale (Betty) Langa, Darlene Langa and Doreen Langa; and his sisters, Joanne Beifus and Ethel Kovach. He was preceded in death by his wife, Winifred Ann Langa; parents, Gasper and Mary Langa; sisters, Florence Thomas and Margaret Langa; and his brothers, George and Thomas Langa. The family will receive friends to celebrate Edward’s life from 4-7 p.m. on Tuesday, January 4, 2022 and again from 4-7 p.m. on Wednesday, January 5, 2022 at the Brunner Sanden Deitrick Funeral Home & Cremation Center, 8466 Mentor Ave., Mentor, OH 44060. A funeral mass will be held 10 a.m. Thursday, January 6, 2022 at Immaculate Conception Church, 37932 Euclid Ave., Willoughby, OH 44094 (Please meet at the church.) Interment with military honors will be in Western Reserve Memorial Gardens following the funeral mass. In lieu of flowers the family requests contributions be made to the Wounded Warrior Project, P.O. Box 758516, Topeka, Kansas 66675-8516 Please offer condolences at www.brunners.com.

Edward J. Langa, 97, of Willoughby, passed away peacefully December 27, 2021 at his home. He was born April 18, 1924 in Cleveland. A U.S. Army WWII veteran who proudly served his country in General Patton&#8217;s 3rd Army in the European Theater,... View Obituary & Service Information

The family of Edward J. Langa created this Life Tributes page to make it easy to share your memories.

Send flowers to the Langa family.