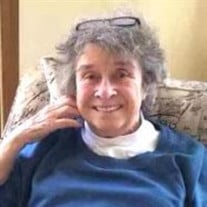 Elizabeth Ann Donnelly, age 85, passed away on January 13, 2021 at Concord Village Skilled Nursing and Rehabilitation Center after multiple illnesses. She was a resident of Mentor for 9 years after moving from Aurora, where she lived for 40 years. Beth was born on January 10, 1936 in Wenatchee, WA to William and Margaret Barrows. She grew up in Bloomington, Indiana and studied English and Education at Indiana University. Her love of the theater brought her together with her future husband, Jim Donnelly, when they acted together in a college production. They married in October of 1955 and lived in several states before settling in Aurora with their three daughters in 1969. Beth taught at Aurora Middle School before moving to Solon High School, where she taught English and directed musicals and dramatic theatre productions until her retirement . Beth attended The Church in Aurora, and enjoyed singing in the choir for many years. During retirement, Beth and Jim enjoyed wintering in Mesa, Arizona, golfing and traveling together. After moving to Mentor in 2011, they lovingly cared for each other, until Jim passed away in 2014. In her spare time, she enjoyed using her musical talent to play piano, often joining with her girls as they sang together. She was a seamstress, an avid reader, and enjoyed playing euchre and doing puzzles of all kinds. She attended Lakeview Bible Church, where she grew in faith in Christ and cherished the love and encouragement from friends. She will be remembered as a loving mom with a wonderful sense of humor and remained witty and wise to the end of her life. Beth was mother to Lynne (Patrick) Curran of Chardon, Laure (Jeff) Schneider of Pittsburgh, and Jayme (Joe) Rafferty of Australia; and grandmother to Caroline, Scott, Lewis, Andrew and Kevin. She was preceded in death by her parents; husband, James Donnelly, and sister, Patricia Spielman. At her request, a memorial celebration will be held at a later date, due to the pandemic precautions inurnment will be at Mentor Cemetery. If desired, memorial contributions may be sent to Wounded Warriors Project, PO Box 758517, Topeka, KS 66675-8517. Arrangements entrusted to the Brunner Sanden Deitrick Funeral Home & Cremation Center, 8466 Mentor Ave., Mentor, OH 44060. Please offer condolences at www.brunners.com.

Elizabeth Ann Donnelly, age 85, passed away on January 13, 2021 at Concord Village Skilled Nursing and Rehabilitation Center after multiple illnesses. She was a resident of Mentor for 9 years after moving from Aurora, where she lived for 40... View Obituary & Service Information

The family of Elizabeth Ann Donnelly created this Life Tributes page to make it easy to share your memories.

Send flowers to the Donnelly family.