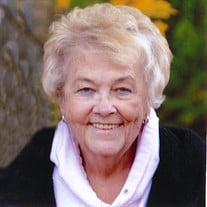 Elizabeth “Liz” Wiertel Elizabeth C. Wiertel, age 79, a longtime Mentor resident, was reunited with her husband Don, the “love of her life” in Heaven, early in the morning of February 5, 2022, with her son John by her side. Liz was born on October 25, 1942, in Erie, Pa. The youngest of fourteen children, she and her seven sisters and six brothers were proud of their Catholic faith and strong Polish heritage. God, Family and Pride in the United States of America were the foundation on which she was raised. Liz attended St. Casmir School and Saint Benedict Academy in Erie. After graduation, she worked as a secretary at the General Telephone company in Erie, she later worked in their Public Relations office. Liz met the love of her life while she was the Maid of Honor for her best friend Judy, and Don while on leave from active duty overseas in the Air Force, was the Best Man for his brother Jim. Their love affair would survive Don’s return to duty until his completion of service and return to Erie, Pa. Liz and Don’s 34 years of marriage began on June 11, 1966, until Don’s untimely death in March of 2000. They moved to Mentor, Ohio in 1968 and began to raise their family. Liz was a homemaker and Don a traveling salesman. After construction was completed, Liz and Don became Co-Owners and Operators of the Convenient Food Mart in Concord, Ohio on August 16, 1977. A business that they would run with their sons for 20 years. Liz was proud of her FAITH in God and was a proud member of St. Gabriel Catholic Church in Concord for 44 years. Liz enjoyed playing golf, bowling and long walks with her husband Don on Ft. Myers Beach in Florida, where it was always “just another ho-hum 80-degree day” for them. Liz and Don also won the couples shuffleboard championship of their park in Florida. The beginner of the park, Liz relished in the victory for years afterward. Liz was also a very enthusiastic sports fan, and never missed a game that her boys played in. She could be found watching sports all weekend long, whether the Browns, Indians, Cavaliers or Golf, Liz loved watching the competition. Of all the things that Liz did in her life however, she was most proud of her children and grandchildren. She enjoyed when everyone could be together, especially summer picnics at her home enjoying the pool or the Thanksgiving Meal that she was the best at preparing. Family is what meant the most to Liz. Survivors include her sons, Tom (Mari) Wiertel, Mike (Lea) Wiertel and John (Holly) Wiertel; and her grandchildren, Jane, Lauren, Kimberley, Aegeas, Elijah, Maggie; many nieces, nephews, great-nieces and great-nephews and many friends in Ohio and at the Gulf View Colony in Ft. Myers Beach, FL. She was preceded in death by her husband, Donald W. Wiertel; parents, Michael and Helen Ropelewski and her siblings, Sophie, John, Al, Ed, Richie, Gertrude, Theresa, Poncho, Danny, Annemarie, Joanne, Helen Mae and Eileen. The family will receive friends from 4-8 p.m. on Thursday, February 10, 2022 at the Brunner Sanden Deitrick Funeral Home & Cremation Center, 8466 Mentor Ave., Mentor, OH 44060. A funeral mass in honor of Elizabeth’s life will be held 9:30 a.m. Friday, February 11, 2022 at St. Gabriel Catholic Church, 9925 Johnnycake Ridge Rd., Concord Twp., OH 44060 (Please meet at the church.) Interment will be in All Souls Cemetery, Chardon. In lieu of flowers the family requests contributions be made to “The Donald and Elizabeth Wiertel Memorial Scholarship” in care of St. Gabriel Catholic Church. A scholarship will be given each year to an 8th grade student that attends St. Gabriel and that will be attending a Catholic High School the following year. Please offer condolences at www.brunners.com.

The family of Elizabeth “Liz” Wiertel created this Life Tributes page to make it easy to share your memories.

Send flowers to the Wiertel family.