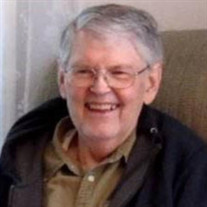 It is with great sadness that we announce the passing into His heavenly home of Eric Habinski, 73, on Thursday, September 16, 2021 at the David Simpson Hospice House, Cleveland, Ohio. He was born on September 27, 1947 in Aalen, Germany to the late Stanislau and Maria Anna Habinski. Eric was an avid reader, especially of Shakespeare and Dracula tomes and loved collecting movies. He was an aficionado of Viking mythology and European history. He enjoyed hiking with his son and tea parties with his daughter when she was young. Mostly, he enjoyed spending time with his family. In 1957 he immigrated to the United States with his mother, father and younger brother and they settled in Hamtramck, Detroit, MI. At age eighteen, he became a naturalized citizen of the U.S. which gave him great pride. After graduating from St. Ladislaus High School, he attended community college for two years and then, at age 20, enlisted in the U.S. Army where he was sent to England, Germany and finally to Vietnam where he served in Military Intelligence. He was honorably discharged in January, 1971 as a Fourth Class Specialist. Back in Detroit, he graduated from Wayne State University earning a Bachelor's Degree in Art History. After that, he enrolled in Scripps Howard Radio School where he received his DJ license. He then traveled to San Bernardino, CA where he opened a book store with a buddy from the Army. It was not a huge success and so he returned to Hamtramck. In 1975 he went to work for a printing/advertising company where he met the love of his life. It was love at first sight and six months later they were married in Westland, MI. They settled in Westland where they had two children, Amy and Robbie. At this time, he worked as a wine salesman. Times were tough in Michigan and so in 1985 they moved to Mentor, Ohio. He graduated from Cleveland State University earning a Master's Degree in Education with a concentration in counseling. In 1986 he joined the United States Postal Service and was still working there at the time of his passing. Survivors include his beloved wife of 46 years, Janice Habinski (nee: Anthony); children Amy Kristine Karolina (Troy) Hough and Robert Eric Siegfried Habinski and sisters-in-law, Judy (Larry) Fritinger and Janet (Bob) Stephens. Preceding Eric in death are his brother, Harald Habinski and brother-in-law, Robert J. Anthony Jr. We will miss you terribly. Ewige Liebe, meinen Liebling The family will receive friends from 11:00 a.m., - 12:00 p.m., Friday, October 1, 2021 at the Brunner Sanden Deitrick Funeral Home and Cremation Center, 8466 Mentor Ave., Mentor, OH 44060. A memorial service will be held 12:00 p.m., Friday, October 1, 2021 at the funeral home. Burial to follow in Mentor Cemetery. Contributions may be made in memory of Eric to Hospice of the Western Reserve, P.O. Box 72101, Cleveland 44192 or donate online at www.hospicewr.org. Send flowers and offer condolences at www.brunners.com

It is with great sadness that we announce the passing into His heavenly home of Eric Habinski, 73, on Thursday, September 16, 2021 at the David Simpson Hospice House, Cleveland, Ohio. He was born on September 27, 1947 in Aalen, Germany to the... View Obituary & Service Information

The family of Eric Habinski created this Life Tributes page to make it easy to share your memories.

It is with great sadness that we announce the passing into His...

Send flowers to the Habinski family.