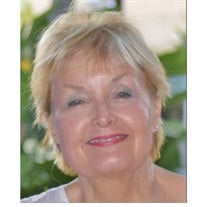 Faith (nee Tweedy) Vitolano, age 74 of Mentor, OH, passed away August 27, 2021, at her residence after a long battle with cancer. She was born December 5, 1946, in Cleveland, Oh to the late Ralph and Georgie Tweedy. She graduated from John Marshall High School in 1965. Faith then went on to be a 1968 graduate of the Cleveland Metropolitan General Hospital School of Nursing, receiving her RN accreditation. She began her nursing career in Medical-Surgical Nursing at Mt. Sinai Hospital, Cleveland OH, St. Thomas Hospital, Akron, OH. and Cleveland Metro General. She continued her profession as a Geriatric Nurse in several nursing facilities on both the East and West sides of the Greater Cleveland area. She was a dedicated and extremely compassionate caregiver. Faith used her nursing skills and caring qualities outside of the nursing field and applied them to the family business at Vitco, Inc., Mentor, OH. as the Human Resource Manager and Director of Safety. Faith was a living example of her Christian Faith. She volunteered when and where she was able and where she could be of support and assistance to someone in need whatever that may be. Her daily living exemplified her Faith. Faith treasured her time with her family. A loving wife, mother, grandmother and aunt, and cousin. She was a true friend to a friend, some of whom she has remained in friendships and contact since grade school. She battled cancer twice. The original breast cancer onset was in 2001 and was released from care with no incidence in June 2009. Metastatic breast cancer returned in 2017 and after fighting the fight it overtook her. She fought all the way. She was slight in stature and her Scottish friend in her breast cancer support group aptly called her the “ Wee Trooper” She is survived by her husband of 52 years, Edmund N. “Eddie” Vitolano; son, Edmund J. Vitolano; daughters, Kerri (Jim) Dray and Susan (Tony) Catania; grandchildren, Halle, Lydia, and Kiersten Dray and Anthony and Ella Catania; sisters-in-law, Teres Raglow and Kathy (Dave) Ehrhardt and other loving family. She was preceded in death by her parents, father-in-law and mother-in-law, Edmund and Bettina Vitolano, and brother-in-law, Jim Raglow. A funeral mass will be held at 11 am on Friday September 17, 2021 at St. Mary of the Assumption Church, 8560 Mentor Ave., Mentor, OH 44060. The family will receive friends at a celebration of life luncheon following the funeral mass. A private family graveside service will be held in Mentor Cemetery. In lieu of flowers, contributions may be made to Hospice of the Western Reserve, P.O. Box 72101, Cleveland 44192 or donate online at www.hospicewr.org or to Birthright Lake Inc., 7237 Industrial Park Blvd, Mentor, OH 44060 or online at www.birthrightlake.org. Offer condolences at www.brunners.com.

Faith (nee Tweedy) Vitolano, age 74 of Mentor, OH, passed away August 27, 2021, at her residence after a long battle with cancer. She was born December 5, 1946, in Cleveland, Oh to the late Ralph and Georgie Tweedy. She graduated from John... View Obituary & Service Information

The family of Faith (nee Tweedy) Vitolano created this Life Tributes page to make it easy to share your memories.