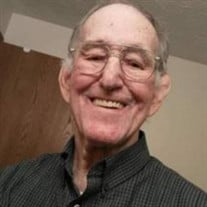 Francisco “Chico” Olah, age 86, of Mentor on the Lake, died January 5, 2021 at Lake West Medical Center in Willoughby. He was born October 1, 1934 in São Paulo, Brazil. Francisco worked as a tradesman at The Malish Brush Company and The Rogers Company. He was a longtime member of Erieside Church in Willowick and he was an Elder and dedicated to their Global Mission Outreach. His hobbies included flying, golf, sky diving and carpentry. He was an avid photographer and dedicated his time in Brazil to his Missionary work building playgrounds and Recreation Centers. Francisco was truly a believer that nothing was impossible and was such an inspiration to everyone who met him. He never stopped dreaming or learning throughout his journey, because he wanted to live his life to the fullest. Survivors include his son, William (Judy) Olah; 3 loving grandchildren, Meryl, Michael and Stephanie; 5 loving great grandchildren, Lilian, Nalaya, Zoe, Douglas and Cali; 2 sisters, Lidia and Esther; and 2 brothers, Jose and Tiberio. He was preceded in death by his wife, Susan Olah; daughter, Janet Vegliano; parents, Emeric and Susana Olah; 3 sisters, Susana, Elza and Yolanda; and 4 brothers, Emeric, Paulo, Estevão and Zoltan. A funeral service to honor Francisco’s life will be held 10 a.m. Thursday, January 14, 2021 at Erieside Church on the Boulevard, 221 East 320th St., Willowick, OH 44095. Private family inurnment will be held at Mentor Cemetery at a later date. In lieu of flowers, the family suggests contributions be made to the Erieside Church on the Boulevard Mission. Arrangements entrusted to the Brunner Sanden Deitrick Funeral Home & Cremation Center, 8466 Mentor Ave., Mentor, OH 44060. Please offer condolences at www.brunners.com.

Francisco &#8220;Chico&#8221; Olah, age 86, of Mentor on the Lake, died January 5, 2021 at Lake West Medical Center in Willoughby. He was born October 1, 1934 in São Paulo, Brazil. Francisco worked as a tradesman at The Malish Brush Company... View Obituary & Service Information

The family of Francisco "Chico" Olah created this Life Tributes page to make it easy to share your memories.

Send flowers to the Olah family.