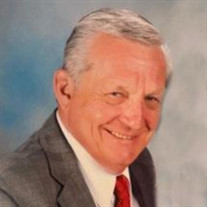 James “Jim” D. Bobeczko, age 73 of Concord Twp., passed away Sunday, January 10, 2021 at home surrounded by his family. He was born April 9, 1947 in Cleveland, OH. Jim grew up in Lyndhurst, Ohio where he attended Brush High School. After high school Jim completed a four year Tool and Die Apprenticeship at Lincoln Electric where he worked for 42 years and had many accomplishments including several patents for innovative ideas in welding and plasma technologies. Jim’s accomplishments included two personal US Patents for an automatic pet feeder and a wall mounted sporting equipment organizer. Jim enjoyed woodworking, golfing, dancing, coaching little league softball, but most of all spending time with family and friends. He was a “Jack of All Trades" and could repair anything around the house and yard. He was always willing to lend a hand to friends and neighbors. Mary was the love of his life since the age of 15. They enjoyed 51 years of marriage together. During his 13 years of retirement he enjoyed spending time with Mary, their four children, eight grandchildren (ages 8 months - 22 years old) and traveling by cruise ship to enjoy the Caribbean and Alaska. He never missed a golf game with his buddies. James is survived by his wife, Mary (nee Pitrone) Bobeczko; children, Christopher (Nicole) Bobeczko, Paula (Brad) Steven, David (Kelly) Bobeczko, Mark (Carrie) Bobeczko; grandchildren, Mackenzie, Kaitlyn, Sara, Charlie, Kayla, Anthony, Andrew and Allyson. Preceding him in death are his parents, John and Olga Bobeczko; sister, Marlene (nee Bobeczko) Hartman. Private family services will be held with burial taking place in All Souls Cemetery, Chardon, OH. Arrangements entrusted to Brunner Sanden Deitrick Funeral Home and Cremation Center, 8466 Mentor Avenue, Mentor, OH 44060. Contributions in memory of James can be made to St. Jude Children’s Research Hospital, 501 St Jude Place, Memphis, TN 38105 or online at www.stjude.org Offer condolences at www.brunners.com

The family of James "Jim" D. Bobeczko created this Life Tributes page to make it easy to share your memories.

Send flowers to the Bobeczko family.