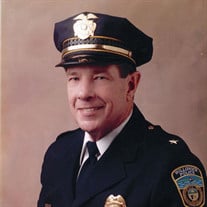 John A. Germ Sr., age 80 of Mentor, passed away Saturday, April 3, 2021 at Enclave at Newell Creek. He was born December 18, 1940 in Cleveland, OH to the late Anthony and Anna Germ. He was a 1956 graduate of St. Joseph High School and attended The University of Miami, Florida for 2 years, until on a visit home to see his parents, he met his future wife, Patricia at a dance. They were married in June 1964. John eventually completed his Bachelor’s Degree in Criminal Justice from Lake Erie College. John became a member of the Willowick Police Department in 1965 and worked his way up the ranks until becoming Chief of the department in 1990. In 2000, he decided that after a 35 year career it was time to retire. Six months into his retirement, he was offered the position as Director of Narcotics, Lake County, where he served for the next 10 years until his second retirement in 2010. John was an avid sports fan and especially enjoyed football. He had been captain of his high school team at Saint Joe's, and loved all teams Cleveland and Ohio State. He was actively involved in his children’s and grandchildren’s lives and loved going to their sporting and other extracurricular events. Each time a Browns, Indians or OSU game was televised, there was no doubt to anyone in the house as to who was (or wasn’t) winning! John loved to travel with his wife Patricia, children, grandchildren, and close friends. Las Vegas became one of their favorite destinations, and although his lovely wife was often the lucky winner, he reveled in her excitement. They enjoyed multiple cruises, Disney World, New Orleans, and Germany but a trip to California to watch two of his grandchildren march with their high school band in the Rose Bowl Parade definitely took the top slot. John immensely enjoyed holiday gatherings, birthdays, cookouts and family Sunday dinners, and any event or occasion that involved his family and friends. When his wife Patricia was diagnosed with Alzheimer's, he devoted all his time and attention to lovingly caring for her. John loved big and was fiercely passionate about the things and people in his life, whether it was his service to the public or his family and friends. His commitment to those passions was genuine and unwavering, and a true testament to what a devoted, loving man he was. Survivors include his wife, Patricia (nee Brooks) Germ; children, Robin (Alan) LaCava, Kim Germ, Kris (Michael) Peresta, and John (Kelly) Germ; grandchildren Brittany (Mark) Dominack, Alan and Natalie LaCava, Corey Nusker, Cal Ruscin, Julian Brooks, Morgan, Alex and Jack Petrocelli, and Connor Germ; and great-grandchildren Eden, Jaxxon and Colton. He was preceded in death by his parents; grandsons, Jonathan, Jarrett, and Zachary Petrocelli; and siblings, Edward Germ and Marie Kricker. The family will receive friends from 3-8 p.m., Friday, April 16, 2021 at Brunner Sanden Deitrick Funeral Home and Cremation Center, 8466 Mentor Ave., Mentor, OH 44060. A funeral service will be held 10 a.m., Saturday, April 17, 2021 at Grace Church of Mentor, 6883 Reynolds Road, Mentor, OH 44060. Burial will follow in Mentor Cemetery. Masks are required and social distancing is encouraged during all publicly attended events. In lieu of flowers, contributions in memory of John may be made to the Alzheimer’s Association, Cleveland Area Chapter, 23215 Commerce Park Suite 300, Beachwood, Ohio 44122 or to St. Jude Children’s Research Hospital, 501 St Jude Place, Memphis, TN 38105. Please offer condolences at www.brunners.com

John A. Germ Sr., age 80 of Mentor, passed away Saturday, April 3, 2021 at Enclave at Newell Creek. He was born December 18, 1940 in Cleveland, OH to the late Anthony and Anna Germ. He was a 1956 graduate of St. Joseph High School and attended... View Obituary & Service Information

The family of John A. Germ Sr. created this Life Tributes page to make it easy to share your memories.

Send flowers to the Germ family.