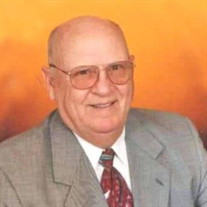 John W. Young, age 88, passed away Thursday, April 22, 2021 at Cardinal Woods Skilled Nursing and Rehab, Madison, OH. He was born March 1, 1933 in Lee Couny, Virginia and resided in Hubbard Springs and Jonesville area until the age of 16, when he moved to Ohio for a brief period. He worked at Ohio Rubber prior to entering the U. S. Army in June of 1952. During his enlistment, he attained the rank of Sergeant and was a Med Aidman in Korea after attending Eta Jima Special School and his most significant attachment was the MED DET 2128-1 US Army Hospital. He received the NDSM, GSM, UNSM, and the Korean Service Medal W/2 BCS. He separated from service in June of 1954. It was shortly afterwards, when he was introduced to Betty in Willoughby, Ohio. They were married on September 25, 1954 and started a family. John's interests were many, but first and foremost was his family and providing for it. He was employed by Cerro Copper and Brass, Lubrizol, from which he retired after 25 years and spent time on the Painesville City Fire Department as a fireman/paramedic. He enjoyed fishing, hunting, and he was very talented in woodworking and remodeling houses. He loved telling a good story and making many, many friends. John was honored to serve as councilman on the Perry Village Council and to work with the Perry Village Fire Department during his time on council. He was always happy to help serve the village in any capacity he could. He is survived by his wife of 66 years, Betty (nee Sponski); daughter, Deborah Zupancic (Thomas); son, William (Kathy); and son, Jeffrey and his Little Buddy, Tyler. Also survived by grandchildren, Eric Yokie (Joanna), Kristina Young Miller (Mark), William (Billy) Young, and Stephanie (nee Yokie) Rush (Bradley). Survivied by great-grandchildren, Jennifer Young, Mark Ryan Miller, Jadyn Young, Christian Young, William (little Billy), Hunter Gibson, Katie Rush, Callie Rush, and Jake Rush. Also survived by niece, Michelle Crook Phillipp (David); great nephews, Dustin and Cody Crook; great-great nephew, Ethan Crook; and great-great niece, Ava Stonum. John was preceded in death by parents, Starlen (Sterling) E. and Cora M. B. (nee Owens) Young; four sisters and four brothers; granddaughter, Melissa Marie Young; mother-in-law, Effie (nee Cooper) Sponski; and sister-in-law, Margaret (nee Sponski) Crook. Family and friends will be received from 10-11:30 a.m., Thursday, April 29, 2021 at Victory Lane Assembly of God, 7550 Bellflower Road, Mentor, OH 44060. A funeral service will follow at 11:30 a.m. at the church. Burial with military honors will take place in Perry Twp. Cemetery, Perry, OH. Masks are required and social distancing is encouraged during all publicly attended events. Arrangements entrusted to Brunner Sanden Deitrick Funeral Home and Cremation Center, 8466 Mentor Ave., Mentor, OH 44060. Please offer condolences at www.brunners.com

John W. Young, age 88, passed away Thursday, April 22, 2021 at Cardinal Woods Skilled Nursing and Rehab, Madison, OH. He was born March 1, 1933 in Lee Couny, Virginia and resided in Hubbard Springs and Jonesville area until the age of 16, when... View Obituary & Service Information

The family of John W. Young created this Life Tributes page to make it easy to share your memories.

Send flowers to the Young family.