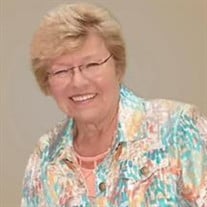 After a difficult 18-month battle against ovarian, endometrial cancer, Judith “Judy” (Ulepic) Sustar, of Waite Hill, passed away at home on July 18, 2021, her 78th birthday, surrounded by family. Judy was born on July 18, 1943, to Dorothy Ann and Joseph F. Ulepic (both deceased). She was the oldest of 6 children and grew up in Euclid, Ohio. Judy graduated from Villa Angela Academy in 1961 then began work as a secretary for Ohio Gear on E. 179th and St. Clair. It was at this job that she learned of a nice, Slovenian Army boy whose father suggested she write to in Germany. After many letters over the span of 9 months, she offered to pick him up at the airport when he returned to Cleveland on July 15, 1964. Thus began the beautiful 57-year love story of Roger John Sustar and Judith Ann Ulepic. The couple wed on May 15, 1965, at St. Christine Church in Euclid. In 1969, Judy supported Roger in the purchase of a small machine shop called Fredon Corporation which has grown to a successful manufacturing company in Mentor, OH due in no small part to her unending patience and understanding of long hours and the ups and downs of business ownership. In 1970, they adopted their son, Christopher Robert and in 1973, they adopted their daughter, Alyson Dawn. Today, the Sustar family has grown to include grandchildren, Christopher Robert Sustar, Jr. (Haley), Emily Lynn Sustar, Chase Reid Scott and Maxwell Carter Scott. Judy loved having family over for meals and cookouts and was always a gracious hostess for large, extended family holiday gatherings. Judy enjoyed quilting, knitting, ceramics, puzzles and golf. Her favorite times were spent with her children and grandchildren. She looked forward to the winter months which were spent with her beloved at their “Sugar Shack” in Florida. She was an active member of Christ Child of the Western Reserve volunteering her time at the Christ Child Clothing Cottage in Mentor and assisting with the layette program with Birthright in Mentor. She is survived by her husband, Roger Sustar; son, Chris Sustar; daughter, Alyson Scott; brothers, Joe (Marilou) Ulepic, Tom (Joanne) Ulepic, and Dave (Sheryl) Ulepic, her loving sister, Terry Krause, grandchildren Chris, Jr. (Haley) and Emily Sustar, Chase and Max Scott and many nieces and nephews. She was predeceased by her parents, Joe and Dorothy; brother, Michael and brother-in-Law, Jim Krause. The family will receive friends from 4:00 - 8:00 pm Thursday, July 22, 2021 at the Brunner Sanden Deitrick Funeral Home and Cremation Center, 8466 Mentor Ave., Mentor, OH 44060. Judy’s request for her birthday was to be surrounded by pink. We encourage everyone to wear their favorite pink clothing to honor our angel. A funeral mass will be held at 11:00 am Friday, July 23, 2021 at Divine Word Church, 8100 Eagle Mills Rd., Kirtland, OH. 44094. Please meet at the church. A private family inurnment in All Souls Cemetery, Chardon, OH., will be at a later date. In lieu of flowers contributions may be made to Christ Child Society of The Western Reserve, 9354 Mentor Avenue, Unit 7, Mentor, Ohio 44060 or Villa Angela-St. Joseph High School in c/o The Judy and Roger Sustar Scholarship, Class of 1961, 18491 Lakeshore Blvd., Cleveland, OH 44119. Please offer condolences at www.brunners.com

The family of Judith "Judy" (Ulepic) Sustar created this Life Tributes page to make it easy to share your memories.

After a difficult 18-month battle against ovarian, endometrial...