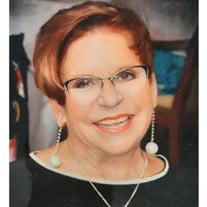 Linda Fross, age 79, of Hilton Head Island, South Carolina, formerly of Mentor, Ohio, passed away on July 14, 2021. Linda was born on September 4, 1941, in Cleveland, OH to Karl and Margaret Schulz. She grew up in Euclid, OH where she attended high school and met her future husband, Ralph, in the marching band. Linda attended Miami University before marrying her high school sweetheart in 1964. During the mid-1960s through 1970s, Linda was an elementary school teacher, homemaker, and volunteer as she raised her three children Heidi, Brad, and Greg in Mentor, OH. As a breast cancer survivor in the early 1980s, Linda became an active volunteer and cancer patient advocate at the American Cancer Society. During this time, Linda became a master seamstress, gourmet home chef and even earned her aircraft pilot’s license. Linda was always a very athletic and active person and never met a sport that she couldn’t master. In the early 1970’s she took up jogging and competed in her first marathon in 1976 (Niagara Skylon International Marathon). After suffering from lower back problems caused by running, Linda took to weight training to build strength. She eventually went on to compete in several women’s bodybuilding events and also became a women’s weight lifting instructor. Linda and her husband Ralph started playing golf in the mid-1980s. Golf quickly became one of Linda’s favorite activities as she joined several women’s golf leagues and competed in many golf tournaments, including the National Senior Games. It was at a National Senior Games competition in San Francisco where Linda fell in love with another sport: Track and Field specifically shot put and discus. Linda went on to compete in four more National Senior Games competitions and even won the Silver Medal in shot put. Linda also loved to travel and see the world. This love of travel started at a very young age as her parents took Linda and her sister Laura on trips to Europe and the American West. Linda and Ralph bought a motorhome in the early 1980s and passed on the traveling bug to their children through road trips to Disney World, California, Hilton Head Island, and all points in between. More recently, Linda really enjoyed traveling by cruise ship as well as going on an African safari (which included a luxury train ride and golfing adventure, of course!). It was during one of her family trips to HHI in the early 1990’s that she and Ralph decided to call it their forever home. Linda has been a resident and member of the Long Cove Club community since 1994 where she has thoroughly enjoyed golfing, kayaking, fishing, eating at the club and sipping wine on her back porch with family, friends, and her best pal Syrah the cat. Linda has always been active in the Methodist church, most recently in the St. Andrew By-The-Sea Methodist Church on HHI. Linda was a Sunday school teacher, greeter, usher, and choir member. Singing in the choir was her favorite as she was able to lift her voice to praise God and inspire many a congregation. Linda is survived by her sister, Laura (Lauridsen); her three children, Heidi (Medvecky), Brad, and Greg and four grandchildren, Olivia, David, Audrey and Jillian. She will be dearly missed by all who were lucky enough to know her. A Celebration of Life service for Linda will be held at 11:00 am on Saturday, January 8, 2022 at St. Andrew By-The-Sea United Methodist Church, 20 Pope Ave, Hilton Head Island, SC 29928. There will be a light reception following the service for anyone who would like to attend. In lieu of flowers, please consider donating in her memory to the American Cancer Society, one of her favorite charities; online at www.cancer.org/ Arrangements entrusted to the Brunner Sanden Deitrick Funeral Home & Cremation Center, Mentor, OH. Offer condolences at www.brunners.com.

Linda Fross, age 79, of Hilton Head Island, South Carolina, formerly of Mentor, Ohio, passed away on July 14, 2021. Linda was born on September 4, 1941, in Cleveland, OH to Karl and Margaret Schulz. She grew up in Euclid, OH where she attended... View Obituary & Service Information

The family of Linda Fross created this Life Tributes page to make it easy to share your memories.