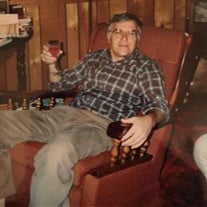 Louis A. Peterlin “Fox”, 82, of Concord, passed away Saturday, November 14, 2020 at Hillcrest Hospital, Mayfield Hts. He was born January 30, 1938 in Cleveland to his late parents, Louis and Frances Peterlin. Lou graduated from East High School in Cleveland, Ohio University and Cleveland State. He taught math at Collinwood High School for 15 years and then became an assistant principal in the Cleveland Schools for 15 years. Lou was a member of the Slovenian home on St. Clair Ave. He was an athlete and played on two softball teams in Cleveland that won the city title. The St. Clair Merchants won in ’62 and the NFMF team won in ’67. After retirement he began his second career playing golf, fishing, cooking and making outdoor furniture. His fondest memories were of family and friends getting together. His last trip to Canada was with his sons and grandsons which he loved and talked about frequently (although he didn’t catch anything). He was known for his jokes and loved making people laugh. Survivors include his wife of 58 years, Linda Peterlin (nee: Wolfe); children, Lou Peterlin, Bob Peterlin, Mike Peterlin and Jennifer Peterlin-Gromosiak; grandchildren, Ashley (Brett) Freiberg, Louie Peterlin, Tucker Gromosiak, Kellen Gromosiak, Luke Peterlin and Rebecca Peterlin and many nieces, nephews and other loving family members. Preceding Louis in death is his brother, Joe Peterlin. Private family services were held. Memorial contributions may be made in memory of Louis to the Wound Warrior Project, P.O. Box 758516, Topeka, KS 66675 or online https://www.woundedwarriorproject.org/ Arrangements entrusted to the Brunner Sanden Deitrick Funeral Home & Cremation Center, 8466 Mentor Avenue, Mentor, Ohio 44060. Offer condolences at www.brunners.com.

The family of Louis A. Peterlin "Fox" created this Life Tributes page to make it easy to share your memories.