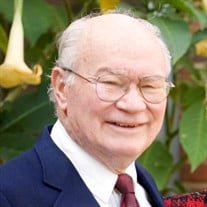 Lynn Fordham passed away on May 8, 2021, in Naples FL at the age of 97. He was a long-time resident of Lexington, KY, and Northeast Ohio. Born in 1924 in Rodney, Ontario, Mr. Fordham graduated from the University of Western Ontario with a B.S. degree in chemistry and physics. In 1952 he and his wife, Mary Messerschmidt, also from Rodney, and two children immigrated to the United States, where he began work at Diamond Alkali/Shamrock in Lake County, retiring as Vice President of Research and Development. He authored a series of publications on polymerization and was recognized by the scientific community for his research on free radicals. He was also the principal inventor on a group of patents in the field of plastics. “Lynn,” as he was known to family and friends, had exceedingly high standards and taught each of his four children a solid work ethic. He also loved nature and maintained a perfect lawn. An outdoor enthusiast, he led his family on many excursions, including to the Holden Arboretum in Kirtland, Ohio, which was the recipient of his generous support. As a result, “Fordham Island” was established in his name at that site. During retirement, Mr. Fordham was involved in philanthropy with major contributions to the University of Western Ontario, Transylvania University, the American Chemical Society, the Holden Arboretum, and the Lexington Library. He was preceded in death by his wife Joellen (January 11, 2021) and survived by his sons Larry (Vikki) of Bath, OH; Dale (Nancy) of Sylvania, OH; daughters Janet Parkhurst (Tom) of Naples, FL, and Amy Foster (David) of Naples, FL; two step-daughters: Heather Martin of Knoxville, TN, and Leslie Green of Dallas, TX; eight grandchildren: Chris (Kim) of Sylvania, OH, Jason (Jen) of Indianapolis, IN; Colby (Alona) of Sylvania, OH; Jim Cooney (Scott Booth) of New York City; Jeff Cooney (Danielle) of Olmsted Falls OH; Katie and Lacey Foster of Naples, FL; and seven great-grandchildren. A private family interment will take be in Riverside Cemetery, Painesville. A celebration of Lynn’s life will be held at a later date. Local arrangements entrusted to Brunner Sanden Deitrick Funeral Home and Cremation Center, 8466 Mentor Ave., Mentor, OH 44060. Please offer condolences at www.brunners.com

Lynn Fordham passed away on May 8, 2021, in Naples FL at the age of 97. He was a long-time resident of Lexington, KY, and Northeast Ohio. Born in 1924 in Rodney, Ontario, Mr. Fordham graduated from the University of Western Ontario with a B.S.... View Obituary & Service Information

The family of Lynn Fordham created this Life Tributes page to make it easy to share your memories.

Send flowers to the Fordham family.