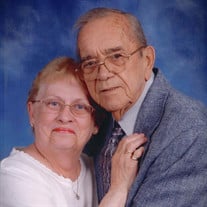 Margaret A. Estep, age 80, passed away peacefully surrounded by her family on October 8, 2021. She was preceded in death by her husband, Billy G. Estep, who passed away peacefully May 28, 2014. Bill and Marge were married for 55 years. They met at a local grocery store while Marge was a cashier. Their love for one another was so strong that they married within 6 months of meeting. Bill and Marge raised their children in Ohio before retiring to Fruitland Park, Florida in 2000. Bill proudly served with the U.S. Army in the Korean War Theatre. As an over the road truck driver for 36 years, Bill received a 6 million mile driver safety award. Marge taught ceramic classes while also doing accounting work for various companies, ultimately retiring from University Hospital of Cleveland. Marge also worked for Walgreens of Fruitland Park, Florida and after 18 years she retired. Bill and Marge were the loving parents of, Janet (Paul) Draganic, Loria Estep, Gail Javins, and Robert (Kristi) Estep. They were the loving grandparents of; Michael, Kelley (Chris), Kristen (Bryan), Kaitlyn, Jonathan (Beth), Brian (Keri), Shelley, Paul, Garrick, Nicole, Elizabeth, Brianna, Samantha; and the loving great grandparents of, Zoey, Julia, Wesley, Jordan, Jonathan, Claire, Nathan, Faith, Hallie, Angelina, Gage, Brantley, Autumn, Layla. Through the years, Bill and Marge enjoyed camping, boating, crafting and family get togethers. Bill was known as a jokester who loved to make everyone laugh. Marge enjoyed baking and cake decorating. Bill was preceded in death by his parents, Clifford and Ida and sister, Kathryn Kinder. Marge was preceded in death by her parents, John and Anna and sister, Grace Ellis. Bill is survived by his brother, Clifford (Betty) Estep; sister, Carolyn Sue (George) Workman; and his nieces and nephews. Bill and Marge will be sorely missed but warmly remembered by those who knew and loved them. Private family inurnment will be held at Ohio Western Reserve National Cemetery in Rittman. Arrangements entrusted to the Brunner Sanden Deitrick Funeral Home & Cremation Center, 8466 Mentor Ave., Mentor, OH 44060. Please offer condolences at www.brunners.com.

The family of Margaret A. Estep created this Life Tributes page to make it easy to share your memories.

Send flowers to the Estep family.