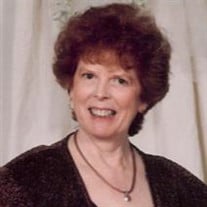 Martha June (Blanken) Smith Starcher, 80, of Mentor, passed away Thursday, April 9, 2020, at Burton Health Care in Burton, Ohio. June was born April 29, 1939 in Jonesville, Virginia to the late Walter and Flora (Sword) Blanken. She was the last surviving of their six children. Following her graduation from Jonesville High School in 1957, she married her first husband of 41 years, Jimmie H. Smith, on May 20, 1957. Together, they moved from Middlesboro, Kentucky to Mentor, Ohio in 1960, where they raised their two children, John and Sandi. June spent the majority of her career employed by the Mentor Public School System, working as an administrative assistant at Ridge Junior High School. Following her retirement in the late 1990s, she began working for Hannah’s Home, a Christian nonprofit organization to which she was incredibly dedicated. After Jimmie’s death in 1998, June wed long-time family friend, Oris V. Starcher, on July 10, 1999. They were married for 4½ years until his death in 2004. June was a devout Christian, and a long-time member of Calvary Fellowship Baptist Church in Painesville. She was an avid crafter, participating in everything from ceramics to painting to quilting and sewing. Music was also an important part of June’s life, and she sang in various choirs throughout the years. Above all, her greatest joy in life was her family, particularly her grandchildren. In addition to her parents, June was preceded in death by her first husband, Jimmie H. Smith; second husband, Oris V. Starcher; daughter, Saundra “Sandi” Smith; sisters, Evelyn Waters, Mary Reynolds, Virginia Eldridge, and Juanita Duncanson; and brother, J.H. Blanken. She is survived by her son, John (Elise) Smith; grandsons, Justin and Jesse Houghton; granddaughters, Angela Houghton, Amanda Smith (Eric Massie), and Shelby (Zac) Lange; and great-grandchildren, Jesse Jr., Andrea, Aviannah, Mary, and Jaxsyn. She is also survived by special niece, Dianne Broyles; along with several other beloved nieces, nephews, and extended family members. In compliance with the current health and safety directives regarding the global pandemic, funeral arrangements for June will be private. Entombment will take place at Whitehaven Memorial Park in Mayfield Village. Arrangements entrusted to Brunner Sanden Deitrick Funeral Home & Cremation Center, 8466 Mentor Avenue, Mentor, Ohio 44060. Offer condolences at www.brunners.com.

Martha June (Blanken) Smith Starcher, 80, of Mentor, passed away Thursday, April 9, 2020, at Burton Health Care in Burton, Ohio. June was born April 29, 1939 in Jonesville, Virginia to the late Walter and Flora (Sword) Blanken. She was the... View Obituary & Service Information

The family of Martha June (Blanken) Smith Starcher created this Life Tributes page to make it easy to share your memories.

Send flowers to the Starcher family.