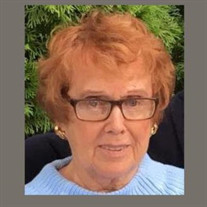 Mary Lou Corlett, 90, of Mentor, passed away Monday, February 1, 2021. She was born September 25, 1930 in Cleveland, Ohio to the late Paul and Dorothy Gleason. She was a generous and loving wife, mother, grandmother and great-grandmother, whose great warmth and sociability will be deeply missed by her family and all who knew and loved her. Following her 1949 graduation from Shaw High School in East Cleveland, she attended Cleveland College of Western Reserve University. She worked as a secretary for legendary Cleveland Orchestra conductor George Szell, then as a medical secretary at University Hospitals. In June 1951, she married her husband Jack, and they began raising a family together. Having suffered from rheumatic fever as a child which resulted in heart damage but wanting to be strong enough to grow her family after the birth of her first child in 1954, she underwent successful open-heart surgery, performed by pioneer American cardiac surgeon Claude Beck at University Hospitals. She and Jack went on to raise a family of four. While she would face health challenges with strength and courage over the next 67 years, she always powered through them and was healthy until her passing. Her Christian faith was an essential part of her life. She was an active member of Mentor United Methodist Church for more than 50 years, where she taught Sunday School for 25 years and was an active member of the church’s Journey group. Survivors include her husband of 68 years, Robert “Jack” Corlett; children, Thomas (Mary Lee) Corlett, John (Doug Van Auken) Corlett, James (Sue) Corlett and Elizabeth (Joseph) Aber; grandchildren, Ashley (Nicholas) Rutledge, Britt (Ian) Warsinskey, Shawn Corlett, Austin Corlett, Victoria Corlett, Sarah Aber, Hannah (PJ) Aber and Shannon Aber; great-grandchildren, Ben Rutledge, Abby Rutledge and Mila Warsinskey; and her brother, James (Elizabeth Maule) Gleason. She was preceded in death by her sister, Patricia Coppedge. A service for immediate family will be held at Brunner Sanden Deitrick Funeral Home and Cremation Center, 8466 Mentor Avenue, Mentor, OH 44060 at 9:30 a.m. on Saturday, February 13, 2021 (it will also be live streamed on Facebook, email [email protected] for details) with burial taking place afterwards in Mentor Cemetery. A celebration of her life will be held later this year in Cleveland. In lieu of flowers, contributions may be made in memory of Mary Lou for a park bench at the Holden Forest and Garden, PO Box 74422, Cleveland, Ohio 44194-002 or to the Hospitality Fund at Mentor United Methodist Church, 8600 Mentor Ave, Mentor, OH 44060. Please offer condolences at www.brunners.com.

Mary Lou Corlett, 90, of Mentor, passed away Monday, February 1, 2021. She was born September 25, 1930 in Cleveland, Ohio to the late Paul and Dorothy Gleason. She was a generous and loving wife, mother, grandmother and great-grandmother,... View Obituary & Service Information

The family of Mary Lou Corlett created this Life Tributes page to make it easy to share your memories.