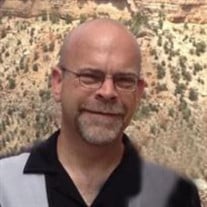 Matthew W. Barnes, age 54 of Mayfield Heights, died Sunday, March 1, 2020, at David Simpson Hospice House, Cleveland, OH. He was born on January 14, 1966, in Westminster, CA. Matt earned a Bachelor’s degree in Radio/TV/Film from Texas Christian University and worked as a Training and Development Specialist II for University Hospitals Health Systems for 14 years. He believed in excellence and that anything could and should be improved. Matt was a sports enthusiast and great fan of the TCU Horned Frogs, the Dallas Cowboys, the Cleveland Indians, and the Cleveland Cavaliers. He was an avid gamer and film buff, with special affection for Star Wars. He was known to sprinkle Monty Python and Airplane! quotes throughout conversations. He collected and built numerous Lego creations, a pursuit that is shared by his sons. He loved taking the boys to car shows and air shows, and more recently, to many concerts. Next to his family, music was his greatest passion, and he listened to everything from classical to rock. He enjoyed travel with the family to Hawaii, Alaska, the Grand Canyon, San Diego, the western Caribbean, and Europe. His family believes that many discussions about World War II must be happening in heaven among Matt and his grandfathers and father-in-law. Survivors include his wife; Aurora Martinez, sons: Steven (Fiancée: Mariah Justice) Barnes and Daniel Barnes, parents: Charles “Chuck” Barnes and Shari Eurich Barnes, siblings: Andrew (Nazeli) Barnes and Susan Lozano and nieces and nephews: John, Anna, Ashlie, Vincent Lee, Monica, and Jazmen, as well as many cousins, aunts, uncles, and friends. Preceding Matthew in death is his brother: Steven Barnes. The family requests contributions be made to Hospice of the Western Reserve, P.O. Box 72101, Cleveland 44192 or donate online at www.hospicewr.org or The Rock & Roll Hall of Fame, 1100 E 9th St, Cleveland, OH 44114 or donate online at https://www.rockhall.com/donate. Arrangements entrusted to Brunner Sanden Deitrick Funeral Home & Cremation Center, 8466 Mentor Ave., Mentor, OH 44060. Offer condolences at www.brunners.com.

The family of Matthew W. Barnes created this Life Tributes page to make it easy to share your memories.