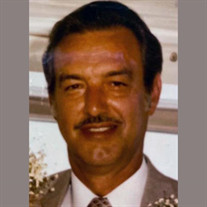 Michael Marikis, 92 of Mentor, passed away Tuesday, March 15, 2022, at The Residence of Chardon surrounded by his loving family. Michael was born on May 28, 1929, in Cleveland to the late Thomas and Caliope Marikis, both from Samos Island, Greece. Michael was a devoted son, brother, husband, father, grandfather, and great-grandfather. He was loved and admired by all who knew him. Michael was a master woodworker. Family, friends, and neighbors were recipients of his beautiful creations. He possessed the talent and ability to “fix anything but a broken heart”. His early career in manufacturing was with TRW Corporation, where he worked with a team that included Cleveland Clinic physicians, to build the first heart-lung machine in Cleveland. He finished his career as plant superintendent with National Acme Corporation. Michael and wife, Virginia enjoyed the past 36 years in retirement together, attending the almost constant activities of all their grandchildren and great-grandchildren. Michael was known for his love of family, wisdom that guided all, and generosity that knew no bounds. We will always miss his quick wit, flashing smile, and the twinkle in his eyes. Rest in peace, Dear One. It was a life well-lived. Survivors include his bride of 70 years, Virginia “Ginny” Marikis; daughters, Sharon (Jeffrey) Brock of Chardon and Kathleen (James) Telzrow of Bluffton, SC; grandchildren, Brian Brock, Justin (Christina) Brock, Kristin (Dan) Painter, and Calla (fiancé, Jacob Brooks) Telzrow; great-grandchildren, Dylan, Charlie, Landon, Alexa, Marissa, and Jenna Brock, and Danny and Hazel Painter; brother, Angelo (Penny) Marikis; beloved uncle of David, Connie, Laurel, Carla, and Michael; sister-in-law, Karen Walburn and many family members, friends, and neighbors including the caring staff and residents at The Residence of Chardon. Preceding Michael in death are his brothers, Peter (1945), Andrew (1973), Steven (2002) Marikis and sister, Mary Paxitzis (2020). A memorial service will be held at a later date. In lieu of flowers, contributions in memory of Michael may be made to St. Jude Children’s Research Hospital (www.stjude.org) and Sanctuary Hospice (5000 Rockside Road, #100, Independence, OH 44131). Arrangements entrusted to the Brunner Sanden Deitrick Funeral Home and Cremation Center, 8466 Mentor Ave., Mentor, Ohio 44060. Offer condolences at www.brunners.com.

Michael Marikis, 92 of Mentor, passed away Tuesday, March 15, 2022, at The Residence of Chardon surrounded by his loving family. Michael was born on May 28, 1929, in Cleveland to the late Thomas and Caliope Marikis, both from Samos Island, Greece. Michael... View Obituary & Service Information

The family of Michael Marikis created this Life Tributes page to make it easy to share your memories.

Send flowers to the Marikis family.