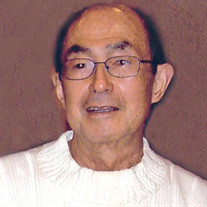 Paul Matsumoto, age 90 of Mentor, passed away August 1, 2020, at home with his family by his side. He was born on October 14, 1929, in Vacaville, CA. At the onset of World War II, Paul and his family were evacuated from their home in Gilroy, CA, and interned for three years in a relocation camp in Poston, AZ. After the war ended in June of 1945, Paul left Poston with a family friend who brought him to Cleveland where his two sisters had relocated. Later in 1945, his parents and his younger sister joined them in Cleveland. In 1947, Paul met the woman who would turn out to be the love of his life, but they didn’t start dating until September of 1949. It wasn’t long before they realized they were meant for each other, and on February 3, 1951 Paul and Mitsuko exchanged wedding vows at the Old Stone Church on Public Square in Cleveland, Ohio. Paul was an aeronautical engineer for most of his working years. As a young man, Paul worked in a factory. Mark Ota, a friend from high school who was an engineer, thought Paul was smart and had the potential to become a blueprint copier and engineering apprentice. During that time, he attended night school to learn trigonometry. After a few weeks, he found he could teach himself trig using the textbook from class along with some help from engineers at the company where he worked. Paul spent the last twenty-four years of his engineering career with Tempcraft Corporation in Cleveland, Ohio. He retired in 1991. After retirement, Paul volunteered at Lake Hospital System as a way to pay back all those who had helped him in the past. He was assigned to the Emergency Department at Lake East Hospital and found his time there fulfilling. He remained in that position for seven years. He is survived by his wife of 69 years, Mitsuko (Akiya), daughter Paula (Mike), sons John (Kathy), Rick (Leslie), and Robert (Patti) and sister, Emily (Dexter) Sakai. He has nine grandchildren, Sarah (Jeff), Matt (Jamie), Billy, Colin (Cayla), Evan (Meredith), Brittany (Dalton), Nia (Spencer), Ben, and Hana (Kevin) and four great-grandchildren, Belle, Ella, Elena and Zoe. He was preceded in death by his parents, Kinichi and Misae (Sakata) Matsumoto and sisters Lucille Iwamoto and Dorothy Sonoda. The family would like to extend their thanks to the Hospice of the Western Reserve for their kind and loving care of Paul, and the support given to the family during this most difficult time. In lieu of flowers, the family requests that donations be made to the Greater Cleveland Food Bank, www.greaterclevelandfoodbank.org/give-help/donate-online or Hospice of the Western Reserve, www.hospicewr.org. A private family service has been held. A celebration of Paul’s life will be held at a later date. Arrangements entrusted to Brunner Sanden Deitrick Funeral Home & Cremation Center, Mentor, OH. Offer condolences at www.brunners.com.

Paul Matsumoto, age 90 of Mentor, passed away August 1, 2020, at home with his family by his side. He was born on October 14, 1929, in Vacaville, CA. At the onset of World War II, Paul and his family were evacuated from their home in Gilroy,... View Obituary & Service Information

The family of Paul Matsumoto created this Life Tributes page to make it easy to share your memories.

Send flowers to the Matsumoto family.