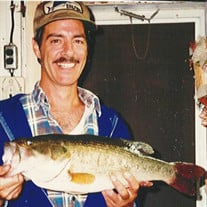 Rainer L. Sacchini, age 77, passed away Wednesday, September 9, 2020, at Salida Woods Assisted Living, Mentor, OH. He was born on June 15, 1943, in Cleveland, OH to the late Columbus and Norma Sacchini. Rainer grew up in Willowick, Ohio, and graduated from Eastlake North in 1961. He was an Army veteran and proudly served during the Viet Nam era from 1963 – 1966 as a Specialist Fifth Class where he was assigned to Ground Surveillance Radar Division as an instructor. He received the Good Conduct Medal and several letters of appreciation from his commanding officers for outstanding performance of duty. He was retired from the Lubrizol Corporation where he was employed as an Electronic Technician. His coworkers called him “the Doc” because he was so skilled at fixing equipment and keeping it going. He was an avid bass fisherman, loved to play pool, enjoyed Lake Erie beaches and boating, meticulously skilled in leather working crafts including making round bridles for horseback riding. He had a great love for cats and always had one in his lap. Rainer is survived by his former wife and beloved friend, Denise Sacchini, brother Wayne (Marcy) Sacchini, sister Sandra (Robert) Jones, niece Renee (Jim) White, nephews Keith (Patty) Sacchini and David (Tammy) Sacchini, and numerous loving great-nieces and great-nephews. The family would like to thank the staff at Salida Woods and Harbor Light Hospice for their loving care. There will be no public services at this time. A military inurnment will be at the Ohio Western Reserve National Cemetery, in Seville, OH. Arrangements are entrusted to Brunner Sanden Deitrick Funeral Home & Cremation Center 8466 Mentor Ave., Mentor. Contributions in Rainer’s memory may be made to Lake Humane Society, 7564-E Tyler Blvd, Mentor, OH 44060 or Lake County Council on Aging, 8520 East Ave, Mentor, OH 44060.

The family of Rainer L. Sacchini created this Life Tributes page to make it easy to share your memories.

Send flowers to the Sacchini family.