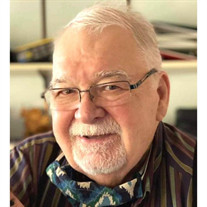 Richard “Dick” Weber, age 82 of Concord Twp., passed away February 7, 2021, at UHHS Geauga Regional Hospital in Chardon. He was born July 6, 1938, to the late Joseph and Barbara (Polk) Weber in Cleveland, OH. Mr. Weber had worked as an architect for M.E. Osborne Construction Company for many years, where he designed buildings such as Buyers Products, the Cleveland Food Bank, and for many other businesses and organizations in the area. He won several design awards from the City of Mentor for his work. He graduated from St. Joseph’s High School in Euclid and received his Bachelor’s Degree in Architecture from Case Western Reserve University. He was a member of St. Mary of the Assumption Church and had previously attended St. Gabriel Church. He enjoyed listening to classical music, cooking, discussing politics, working on and building computers, and he was a fan of the Cleveland Browns. Mr. Weber had been a member of the U.S. Army National Guard. He is survived by his son, Greg (Karen) Weber; daughter, Kim (John) Coleman; son, Todd (Maria) Weber; daughter, Jodi Otto; grandchildren, Shannon (Ricky) Stuart, Chelsea (Adam) McHugh, Leah (Keith) Holpit, Madeline Otto and Nathan Weber; great-grandchildren, Chloe McHugh, Thomas McHugh, Addison Stuart, and Mackenzie Stuart; and brother Robert (Janet) Weber. He was preceded in death by his wife Joan (Brunetz) Weber. The family will receive friends from 10 am – 11 am Thursday, February 11, 2021, in the Gathering Center at St. Mary of the Assumption Church, 8560 Mentor Ave. Mentor, OH 44060. Followed by a funeral mass at 11 am on Thursday at the church. Masks are required and social distancing is encouraged during all publicly attended events. Interment will be in All Souls Cemetery, Chardon, OH. In lieu of flowers, contributions may be made to the Alzheimer’s Association Cleveland Area Chapter, 23215 Commerce Park Suite 300, Beachwood, Ohio 44122 or online at www.alz.org/cleveland Arrangements entrusted to the Brunner Sanden Deitrick Funeral Home & Cremation Center, Mentor, OH 44060. Offer condolences at www.brunners.com.

The family of Richard "Dick" Weber created this Life Tributes page to make it easy to share your memories.