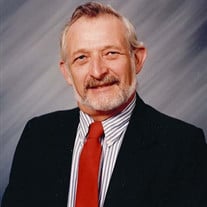 Richard Lee Trembour, age 82, passed away Friday, November 20, 2020 at Heartland of Willoughby. He was born July 24, 1938 in Wilkinsburg, PA to the late Frederick W. and Margaret (Davis-Culbertson) Trembour. Rick graduated from Cleveland Hts. High School and then attended Bowling Green State University, where he majored in Art and received his BFA in Art Design. He was a veteran of the US Army, where he served from August 1962-1964. His father worked for the US Government in Germany in the early 1940s, where his family also lived with him. They were on one of the last planes to leave Germany before the Berlin Airlift. Richard worked as a HVAC engineer prior to buying The Art Gallery in Willoughby. He was the owner and framer for several years before retiring due to health issues. Rick enjoyed classical music and attended numerous Cleveland Orchestra Concerts. He also was a former member of the Cleveland Museum of Art and attended special exhibits. He was an avid amateur astronomer and was a member of the Chagrin Valley Astronomical Society. Rick also was a member of the Professional Picture Framers Association. He is survived by his wife, Georgeanne (nee Dlouhy) Trembour; brother, William (Elsa) Trembour; and niece, Elsa. A memorial service with held at a later date. Contributions in Rick’s memory may be made to Hospice of the Western Reserve, P.O. Box 72101, Cleveland, OH 44192. Online donations may be made at www.hospicewr.org or to the Chagrin Valley Astronomical Society, P.O. Box 11, Chagrin Falls, OH, or to the Puppy Raisers for the Blind, Inc., 1168 S. Beachview Road, Willoughby, OH 44094. Arrangements entrusted to Brunner Sanden Deitrick Funeral Home and Cremation Center, 8466 Mentor Ave., Mentor, OH 44060. Offer condolences at www.brunners.com.

The family of Richard Lee Trembour created this Life Tributes page to make it easy to share your memories.

Send flowers to the Trembour family.