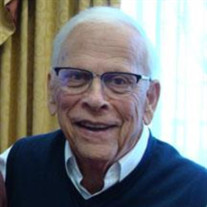 Ronald Frank Obergefell, 85, of Mentor died September 15, 2021 after a brief illness. Ronald was born October 7, 1935 in Sandusky, Ohio to Clarence and Helen (Miller) Obergefell. He was a 1953 graduate of St. Mary’s High School in Sandusky and went on to study Mechanical Engineering at the University of Dayton while also serving in the National Guard. He later continued his education at Case Western University, earning a Master’s of Business Administration. Ronald married his college sweetheart and loving wife of 61 years, Suzanne (Montgomery) Obergefell on December 26, 1959, and moved to the Cleveland area to start a family and work as an engineer at Addressograph-Multigraph and later, the Trabon division of Houdaille Industries. While at these firms, he worked both individually and as part of a team to design addressing equipment and lubricating systems, resulting in nine patents. His career path then led him to Fluid Controls, where he eventually became President. In 1985, Ronald’s entrepreneurial spirit inspired him to switch directions and introduce the first Mailboxes Etc. (later, The UPS Store) in Ohio. He went on to become the Area Franchise Owner for Northern Ohio, and felt extremely blessed to open that first store with his entire family and later, to share the management of several stores and the Area Franchise with his daughters. He retired from the Franchise in 2004 and spent several years enjoying the warmth of Florida before returning to Geneva and then Mentor to be close to family. Ronald was a masterful planner and thinker, especially as life began to present challenges and adventures. He was a devoted husband and a loving and protective caretaker. Ronald was soft spoken with a wry sense of humor. He loved his family dearly, but also knew when it was time to turn the hearing aids off. His Catholic faith, golfing, gardening, cooking, dancing, hiking, and traveling were some of his passions, and he crossed an item off his bucket list in 2015 when he and Suzanne traveled to Italy and saw Pope Benedict. After their 2006 move to Florida, he made sure that the growing families of each of his children had the opportunity to travel and spend time visiting with them and making wonderful memories. His whole family Christmas brunch gatherings at Quail Hollow and annual summer picnics gave steady opportunities for everyone to be together. In addition to his wife, Ronald is survived by eight children, 26 grandchildren, and seven great-grandchildren, with one more on the way. They are: daughter, Louise Carter and husband, Michael and their children, Liesl, Ian, and Keefe Carter; daughter, Lenore Emerson and husband, John and their children, Kathleen, Brenda, and Paul Emerson; daughter Paula Liberatore and husband, John and their children and grandchildren: Mary Claire (Jesse) Felts and Leo, Emilia, and Jude Felts; Margaret (Kwami) Adoboe and Joachim Adoboe; Bryan (Brittany) Liberatore; Matthew, Daniel, Emma, Grace, and Andrew Liberatore; daughter, Brenda Stenger and husband, Robert and their children and grandchildren: Suzanne (Bert) Wray and baby Bert expected in October; Kelly (Joe) Gregorc and Matthew, Emily, and Noah Gregorc (born just two days after Ronald’s passing); and James (Kaitlin) Stenger; son, Roger Obergefell and wife, Karla and their children, Kevin, Jason, and Gretchen Obergefell; son, Douglas Obergefell and wife, Melissa and their daughters, Anna and Thea Obergefell; son, Glenn Obergefell and wife, Susan and their daughters, Molly, Rose, and Laura Obergefell; and daughter, Carla Kozlowski and husband, Jim and their daughter, Raquel Kozlowski. Ronald also leaves behind extended family and many nieces and nephews. Besides his parents, Ronald was preceded in death by an infant son, Bryan Joseph Obergefell, and brother, Richard (Terry) Obergefell, as well as several beloved brothers and sisters-in-law. A Funeral Mass will be held 12:00 p.m., Friday, September 24 2021, at St. Gabriel Catholic Church, 9925 Johnnycake Ridge Road, Concord Township, OH 44060. Please meet at the church. Burial to take place in All Souls Cemetery, following mass. The family respectfully asks that masks be worn during all public events. The family suggests memorial contributions be made to Cleveland Catholic Charities 1404 E. Ninth Street, 8th Floor, Cleveland, OH 44114-1722 Arrangements entrusted to the Brunner Sanden Deitrick Funeral Home and Cremation Center, 8466 Mentor Ave., Mentor, OH 44060. Offer condolences at www.Brunners.com

Ronald Frank Obergefell, 85, of Mentor died September 15, 2021 after a brief illness. Ronald was born October 7, 1935 in Sandusky, Ohio to Clarence and Helen (Miller) Obergefell. He was a 1953 graduate of St. Mary&#8217;s High School in Sandusky... View Obituary & Service Information

The family of Ronald F. Obergefell created this Life Tributes page to make it easy to share your memories.

Send flowers to the Obergefell family.