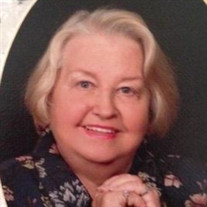 Rosalie J. Malik, age 89, of Chardon passed away Tuesday, October 20, 2020 at Tri-Point Medical center, Concord Twp. She was born on August 21, 1931 in Cleveland, Ohio. Mrs. Malik retired as an Administrative Assistant for Gulfstream Aerospace in Savannah, GA in 1993. Her husband, Jim, had also worked for Gulfstream at the same time as she did. Rosalie and Jim were married on January 13, 1951. They initially lived in the Cleveland area and then moved to Brecksville. The family eventually moved to Mentor, where the children went through their middle school and high school years. In 1976, Rose and Jim moved to Savannah, GA, where Jim was transferring to work with Gulfstream. Rosalie enjoyed gardening, playing Scrabble, watching any football game on TV, whether NFL or college and LOVED watching Wheel of Fortune regularly. She really enjoyed sweets and in her time was a very good baker. From when she was a teenager and well into her 60’s, she always found happiness in sewing. She sewed the majority of her clothes and was an excellent seamstress, even though it was not her profession. She had her own personal label that went into her garments. In her later years., she enjoyed keeping a journal for herself. When they lived in Savannah, GA, for a while Jim and she were members of the Savannah Symphony and enjoyed getting dressed up for a night of culture. Another happy activity they shared was dancing. They were both terrific polka dancers and were usually sought out by others at weddings to be dance partners. Even in her older age, Rosalie welcomed the chance to bust out a polka. Anywhere. Anytime. Even if it was her by herself. She just wished her children had learned to polka dance. She was not a global traveler. Most of her trips were done by car. After Jim and she relocated to Savannah, GA from Mentor, OH, there were regular trips back north to Mentor and the Cleveland area to visit family and friends. Journeys were also made to the Chicago area where her son, Jim, and his family, and eventually her son, Jerry, lived. In her later years, just the chance to get out of her care facility to “go for a car ride” was an absolute joy for her. She just loved to be out driving to see the beauty around her. She always appreciated the simple gifts. Rosalie’s faith and her involvement in the Catholic churches she attended were also special to her. Particularly her years attending St. Mary of the Assumption in Mentor, OH, and Saint Anthony’s Catholic Church in Hardeeville, SC. This was her parish when Jim and she lived in Sun City in Bluffton, SC. But probably more than anything else, Rosalie loved her three children. And in time, she also loved being a grandmother. Living far from all of them wasn’t an easy thing for her. But whenever she could, Rosalie generously shared her love for all of them. Being around young children was something that always brought out happiness in her. She fondly remembered when Jim, Jerry and Marcia were “her babies.” Survivors include her children: James “Jim” (Lesley) Malik III, Jerome “Jerry” Malik, and Marcia (William “Bill”) Cannato; grandchildren: Adrienne (Dave) Malik-Schmitz, James Malik IV, William “Bill” (Marissa) Cannato and Michael Cannato. Preceding Rosalie in death are her husband: James (Jim) Malik Jr., parents: Stanley and Mary Jedrzejek, and siblings: Mary Holcomb, John, Mike, and Edward Jedrzejek, and their spouses. Her brother, Stanley died in infancy and her brother Julian (Jerry) lost his life in World War II at the Battle of the Bulge in 1945. Arrangements entrusted to Brunner Sanden Deitrick Funeral Home & Cremation Center, 8466 Mentor Ave., Mentor, OH 44060. The family suggests contributions may be made to The Lupus Foundation of America, www.lupus.org/ohio/donation-page, which is directly associated with Ohio. Or to the Alzheimer’s Association, www.alz.org/donate, which is linked to the national website. Offer condolences at www.brunners.com.

The family of Rosalie J. Malik created this Life Tributes page to make it easy to share your memories.

Send flowers to the Malik family.