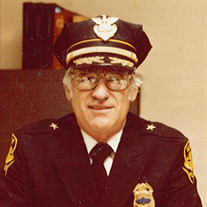 Thomas C. “Tom” Fracci, 95, of Mentor, passed away Thursday, July 22, 2021 at Symphony of Mentor. A lifelong resident of Mentor, he was born April 7, 1926 to the late Joseph and Serafina “Fannie” Fracci. Tom was devoted to his family, friends, and community. He attended Mentor High School before being drafted into the U.S. Army in 1944. Tom attended training in Ft. Knox Kentucky where he became a mechanic and Tank driver. After being assigned to the 67th Armored Regiment, assigned to the 2nd Armored Division, Tom was sent to Europe. Surviving the Battle of the Bulge in 1945, Tom’s unit was one of the first American forces to enter into Germany as the war came to an end. After returning home to Mentor, Tom helped with the family business, Fracci Florist. In 1948, Tom began his service to the Mentor Community. Tom was hired as one of five full time Patrolmen with the Village of Mentor. In 1962, he was promoted to sergeant before again being promoted to Captain in 1966. Tom served as Chief of Police from 1976-1981, where he was instrumental in the growth and development of Mentor. A dedicated public servant, Tom always put the needs of his officers and residents first. Tom married Darlene, his wife of 63 years in 1958 before having his daughter Jill and son Joseph. Over the many years, Tom, a tireless worker, owned or operated over 20 local businesses, bars, and restaurants with his brothers, friends and children. Employees loved and respected him. In his later years, Tom spent much of his time in his garden with his grandchildren. Tom also developed a reputation as a regular smiling face and storyteller at the local breakfast counter. Tom was also best known for driving around town in his beloved Army Jeep. Survivors include his wife Darlene Fracci; children Jill (David Orahoske) Fracci, and Joe (Kathryn) Fracci; grandchildren Daniel, Michael, Annabella, and James Fracci; brother Robert (Janice Pinzone) Fracci; and numerous cousins, nieces, and nephews. Preceding Tom in death are his parents Joseph and Serafina Fracci; and siblings, Leonard (Jeanne) Fracci, Dorothy (Perry) Volpone, and Helen (Dick) Sopko. The family will receive friends from 1-4 p.m. Saturday, July 31, 2021 at the Brunner Sanden Deitrick Funeral Home and Cremation Center, 8466 Mentor Ave., Mentor OH 44060. In lieu of flowers, the family requests that contributions be made in Thomas’s memory to the Alzheimer’s Association, Cleveland Area Chapter, 23215 Commerce Park Suite 300, Beachwood, OH 44122 or Hospice of the Western Reserve, P.O. Box 72101, Cleveland, OH 44192 or donate online at www.hospicewr.org. Offer condolences at www.brunners.com

The family of Thomas C. "Tom" Fracci created this Life Tributes page to make it easy to share your memories.

Send flowers to the Fracci family.