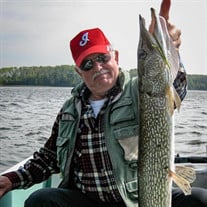 Timothy S. McCreary, age 79 of Chardon, passed away on Friday, November 26, 2021, at Concord Village Skilled Nursing and Rehabilitation. He was born June 28, 1942, in Cleveland, Ohio. Raised in Willoughby, Ohio, he graduated from St. Joseph High School (Villa Angela-St. Joseph) in Cleveland and attended John Carroll University in University Heights, Ohio. Tim entered the Army where he proudly served as an officer until his honorable discharge in 1968. His days in the military, the discipline and the comradery, made a life-long impact. He built a career in banking, first with National City Bank, later with The Middlefield Banking Company. Beloved by co-workers and clients, he was a kind-hearted man who tirelessly worked to leave things better than he found them. A shining example of how to make the world a better place, he would clear ice and snow off of his co- workers' cars, shovel sidewalks, push randomly scattered shopping carts back from the parking lot, and his most recent ‘retirement job’, push many neighborhood trash bins back to the garages. His volunteer work in the community included delivering Meals on Wheels, ushering and assisting in offices at Catholic Churches. Tim was a long-time member of the Painesville and Chardon chapters of Rotary International, receiving a Paul Harris Fellow award for his service. Family was his top priority, always attending his son’s and grandson’s sporting events and activities and tirelessly caring for his aging parents. He enjoyed golfing, classic westerns, Cleveland sports, and blues music. His favorite way to relax was fishing, including various trips to lakes and rivers throughout Canada. Survivors include his wife of 55 years, Pat (Brewster) McCreary; son, Sean McCreary; daughter-in-law, Kate (Retsch) McCreary; grandson Declan McCreary; sister, Maureen Carter; and brother, Kevin McCreary. He was preceded in death by his parents, Gerald and Dorothy McCreary; and brother, Terrence “Terry” McCreary. In lieu of flowers the family requests contributions be made to Hospice of the Western Reserve, P.O. Box 72101, Cleveland, OH 44192. Donate online at www.hospicewr.org. If you would like to honor Tim, do something kind today that leaves the world a better place than you found it. A memorial and celebration of Tim’s life will be in Spring of 2022. Arrangements entrusted to the Brunner Sanden Deitrick Funeral Home & Cremation Center, Mentor, OH. Offer condolences at www.brunners.com. Send flowers and offer condolences at www.brunners.com.

The family of Timothy S. McCreary created this Life Tributes page to make it easy to share your memories.

Timothy S. McCreary, age 79 of Chardon, passed away on Friday,...

Send flowers to the McCreary family.