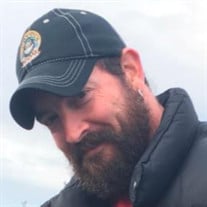 Ty Phillips, 44, of Mentor, passed away August 23, 2021 at Lake West Medical Center, Willoughby. He was born October 15, 1976 in Mayfield Hts. Ohio. The most special thing about Ty was that he had such a wide array of interests. No matter what he was interested in, he pursued it with a passion. He had an obvious athletic side. In his early years Ty took an interest in the Martial Arts and yoga. Then he moved on to competing in Strongman competitions and the Scottish Highland Games. Eventually he transitioned into the sport of powerlifting. Not only did he lift and compete, but he opened his own gym, The Gorilla Pit, where he was able to provide a motivational environment for anyone interested in lifting and developing the warrior mentality. He created an atmosphere of determination, hard work, and true Viking power. He took such pride in helping athletes and friends train and reach their true potential. Ty was also an intellectual through and through. He referred to himself as a bibliophile because of his intense passion for books and vast wealth of interests and knowledge. He loved to read about the sciences as well as science fiction. He collected many books and read up on psychology, religion, Buddhist ideas and practices, the animal kingdom (primates in particular), and much, much more. Along with reading, Ty loved to write. He wrote the most beautiful pieces on life, love, and anything that touched his heart. He did so with great mental clarity just to share his unique perspective with others. Additionally, he created his own websites and blogs in an effort to share his thinking on many topics. Ty had an amazing natural talent for photography. He would take pictures anywhere and everywhere. Some of the subjects he was most proud of were his urban landscapes and the people within them, along with all things nature. He leaves behind a beautiful collection of photographs of plants and animals, including insects and the occasional reptile, from his many trips to the Metroparks. His talent in the area of photography was remarkable. Ty was known for his love of DC comics. Batman was his favorite superhero. It was virtually impossible to be in Ty’s presence and not find something representative of Batman. This past year found him fulfilling his lifelong dream of owning a Softail Heritage Harley Davidson. He was so very proud to tell everyone close to him that he finally did it! He rode it any chance he had. Throughout his life a few things remained constant. Ty had the kindest soul around. There wasn’t anyone he wouldn’t help in any way that he could. His kindness extended to animals. He fostered or adopted a variety of dogs over the years, as well as rescued stray kittens from random places. He considered these furry friends to be part of the family. That was part of his loyal and protective nature. Ty loved nothing more than his family. His three daughters were everything to him. He could not have been more proud of each of them for their own special talents and achievements. Nothing brought him more happiness and joy than his girls. Ty attacked life with a passion that can’t be matched. That’s why so many were drawn to him and will never forget him. His big hearty laugh will remain in our memories forever. Never forget our love... Death leaves a heartache no one can heal. Love leaves a memory no one can steal. Ty... you fulfilled the hopes and dreams of so many and you will live forever in our hearts. Survivors include his daughters, Mia Phillips and Summer Rath (their mother, Sherry Rath) and Brynn Phillips (her mother, Beth Sustin); mother, Debbie (Wade) Reese; sister, Breiana (Jonah) Ullman; grandmother, Dottie Wigand; loving companion, Jacqui Bruno and her children, Jenna, Jimmy, and JiJi Rhodes-Bruno; nephew, Ian Ullman; niece, Aria Ullman; uncle, John Wigand; cousins, Nada Wigand (daughters, Laila and Lulu); all of his furry companions and many other loving family members and friends. He was preceded in death by his grandfather, John Ronald Wigand. Private family services were held. Contributions in memory of Ty may be made in care of the family. Arrangements entrusted to the Brunner Sanden Deitrick Funeral Home & Cremation Center, 8466 Mentor Ave., Mentor, OH 44060. Offer condolences at www.brunners.com

Ty Phillips, 44, of Mentor, passed away August 23, 2021 at Lake West Medical Center, Willoughby. He was born October 15, 1976 in Mayfield Hts. Ohio. The most special thing about Ty was that he had such a wide array of interests. No matter... View Obituary & Service Information

The family of Ty Phillips created this Life Tributes page to make it easy to share your memories.