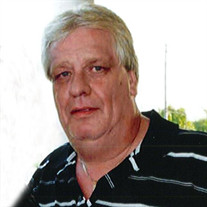 Alex S. “Goobie” Dudas, 64, of Mentor on the Lake, died December 25, 2020 at Lake West Medical Center in Willoughby. He was born December 12, 1956 in Cleveland. Mr. Dudas worked as a machine operator and laborer. He enjoyed being in his garage and loved working on small engines and woodworking. Hobbies of Goobie’s included riding his Harley with his son in law, fishing, and spending time with his grandchildren. Alex was the kind of man that either he liked you or he didn’t, there was no in between. He was often times misunderstood. Some people knew him as Grumpy because we used to say he was a grumpy old man, but inside he was just a giant Teddy bear. Alex had a huge heart and would try to help anyone that needed it. He will be truly missed. Survivors include his wife, Holly Dudas; children, Shanin Storm, Steve Dudas, Blake Dudas, Adam Dudas, Megan (Marco) Berkman, Daniel Berkman; many loving grandchildren, and great-grandchildren; sisters, Lisa (Romano) DiMarco, and Nickie (Rick) Kasunic; and his brother, Dominic (Barbara) Dudas. He is also survived by many nieces, nephews, other family members and his dog, Hunter. He was preceded in death by his parents, Alex and Eda Dudas; siblings, Pat, Theresa, and Frances. The family will receive friends from 3-5 p.m. Saturday, January 2, 2021, at the Brunner Sanden Deitrick Funeral Home & Cremation Center, 8466 Mentor Ave., Mentor, OH 44060. A funeral service to conclude the gathering will begin at 5 p.m. on Saturday at the funeral home. Masks are required and social distancing must be observed during all publicly attended events. Send flowers and offer condolences at www.brunners.com.

The family of Alex S. "Goobie" Dudas created this Life Tributes page to make it easy to share your memories.

Send flowers to the Dudas family.