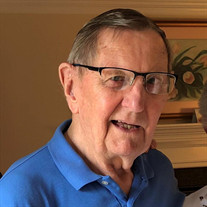 Carl A. Erickson, age 89 of Willoughby, Ohio and formerly of Allyn, Washington, died Thursday, December 3, 2020, at Lake West Medical Center in Willoughby. He was born February 26, 1931, in Titusville, PA, and grew up in Oil City, PA. Graduating from Penn State University in 1953 with a degree in mechanical engineering and an Army ROTC commission, Carl served a two-year commitment with the US Army Corps of Engineers. He then worked for United Aircraft in Windsor Locks, CT, and Oilwell Supply in Oil City, PA. In the late 1950s, Carl went to work as a design engineer in the oil and mining industries for Joy Manufacturing Company in Franklin, PA. During his career with Joy, he served in design and management roles in Pennsylvania, New Hampshire, Alabama, and Texas. He visited more than 100 coal mines in the US and abroad, including a trip to Russia as a member of a technical delegation. Carl retired from Joy as an engineering manager in 1989. Carl spent summers during high school and college driving nails and sawing boards for his father, a building contractor. He later enjoyed building his own home, raising his daughters, doing household projects, playing golf, and managing personal finances. He was happily married for more than 55 years to his first wife, Barbara, until her death in 2010. Carl then reconnected with his Oil City High School sweetheart, Jane Kerr, and moved from Washington to Ohio. They were married in 2011 and later moved to Ohio Living Breckenridge Village in Willoughby where they were happy to have nearly ten years together. Family members recall many fond memories of Carl over the years, including: Daughter Trish: “I have fond memories of Saturday nights with my parents at Kozy’s restaurant in Rouseville, PA listening to my guitar teacher, Bill Huber, and his family play sweet, beautiful music. Our trip to Sweden to meet my father’s relatives was also very memorable. My father and I shared a love of boating, and there are many fond memories of us boating with his pal Ed Botegal and kayaking with him at my cabin on Hartstene Island in Washington state. He helped me out there so much, chopping wood and fixing whatever needed to be fixed.” Sister Lois: “While Carl was eight years older than me, that limited our conversations while I was young. As we grew older, he was always ready to listen and became a very good role model for me. Carl and my husband Don had a close relationship over the years. They spent time on the internet and phone discussing and troubleshooting issues around our homes. We will miss Carl and especially our regular Saturday phone calls.” Stepdaughter Joy: “I admired that Carl was confident in his ability to operate in the world. He was not hesitant to move across the country to marry an old friend, join a new family, and make a place for himself in a new community.” Stepdaughter Gay: “I learned many lessons from Carl - about forgiveness and generosity. It was wonderful to see how he and my mom shared a common history from Oil City, PA, and were happy to have each other's companionship and love. Carl found great joy in being generous to our family and getting to know our five children.” Stepdaughter Ann: “I admired Carl's determination. He would often call me to ask for help with a computer or iPad problem and we would work through it together. Nothing deterred him. When we made progress, he was so delighted. He was also delighted to be of Swedish heritage and had a great love of dogs.” Survivors include his wife Jane (Kerr) Henderson Stoyle Erickson; daughter Trisha A. Erickson of Port Townsend, WA; sister Lois (Donald) Heasley; stepdaughters Joy (Phil Lammers) Henderson, Gay (Steve) Eyerman, and Ann (Mary Halbrooks) Henderson; brother-in-law Stephen Kerr, seven step-grandchildren, a step-great-grandson, and several nieces and nephews. Preceding Carl in death are his first wife Barbara Erickson, daughter Johanna Erickson, parents Sven and Ethel Erickson, three-year-old brother Paul Erickson, and sister Elaine Klinger. The family will hold a private service. In the summer of 2021, they plan for a graveside memorial at Grove Hill Cemetery in Oil City, PA. Contributions in Carl’s memory can be made to St. James Episcopal Church, Lunch Program, 131 North State Street, Painesville, Ohio 44077. Arrangements entrusted to Brunner Sanden Deitrick Funeral Home & Cremation Center, 8466 Mentor Ave., Mentor, OH 44060. Please offer condolences at www.brunners.com

The family of Carl A. Erickson created this Life Tributes page to make it easy to share your memories.

Carl A. Erickson, age 89 of Willoughby, Ohio and formerly of...

Send flowers to the Erickson family.