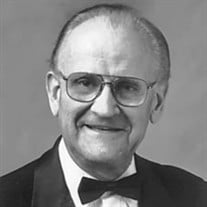 Charles M. “Chuck” Frank, age 88 of Mentor, died Tuesday, October 27, 2020 at Fairmount Health Center in Willoughby, OH. He was born August 4, 1932 in Athens, OH. Mr. Frank was an interim director at Rabbit Run Community Arts Association from 1998-2001, director of the Fine Arts Association from 1987-1998. Mr. Frank retired from the faculty at Lakeland Community College where he served as professor of music and department coordinator for 16 years. Prior to his tenure at Lakeland, he taught for 13 years in the Wickliffe City Schools, where he developed outstanding marching, concert and jazz bands that received state and national recognition. Mr. Frank earned his Bachelor of Science in Education degree from Ohio University in 1954 and a Master of Arts degree from the University of Iowa in 1958. During his two years of military service, Mr. Frank was stationed in Germany with the U.S. Army 9th Division Band. Chuck served as an Ohio Music Education Association music adjudicator as well as a guest conductor and clinician throughout Ohio and taught for several summers at Blue Lake Fine Arts Camp in Michigan. He was responsible for organizing the Lakeland Jazz Festival in 1973 and the Lakeland Summer Music Camp in 1979. He has held district and regional offices in the Ohio Music Education Association and the International Association of Jazz Educators. He was selected as the 1987 Jazz Educator of the Year by the Ohio Unit of IAJE. The Ohio University School of Music of Alumni and Friends presented Mr. Frank with the Achievement in Service Award in 1992. He held memberships in the National Association of Music Education, The Association of Concert Bands and the Willoughby Rotary Club and was inducted into the Wickliffe Hall of Fame for his contributions to the arts. Mr. Frank received the Lakeland Community College Distinguished Service Award for a member of the community at Lakeland’s Commencement on May 10, 2008. Mr. Frank founded the Lakeland Civic Band in 1977 and served as director and conductor for 40 years. Chuck and his wife, Marjorie have been residents of Mentor for 52 years. They have been longtime members of Trinity Lutheran Church in Willoughby. Both are big dog lovers and served as officers in the Greater Metropolitan Cleveland Miniature Schnauzer Club. They enjoyed camping and trailering for 53 years. Their travels took them throughout Canada and a large portion of the United States. Mr. Frank enjoyed sharing his love of music with countless students and band members. Anyone who was under his direction will remember his extensive vocabulary, famous sayings, corny jokes and his command of the room. He loved the time he spent with family enjoying a good meal, traveling and attending events and he always appreciated a good laugh among friends. His legacy will carry on in the lives of those who knew him, respected him and loved him. Survivors include his wife of 66 years: Marjorie A. (Groh) Frank, daughters Lisa (Donald) Berkemeier and Heather (Shawn) Ambrus, grandchildren: Timothy and Thomas Berkemeier, Devon and Hailey Ambrus and furry companion, Daisy. Preceding Chuck in death are his mother: Marguerite (Wood) Frank, father: Nihle (Margaret) Frank, sister: Martha Felstein and furry companions: Beau and Niles. Private family service will be held at Trinity Lutheran Church. Private family interment will be in Mentor Cemetery. Arrangements entrusted to Brunner Sanden Deitrick Funeral Home & Cremation Center, 8466 Mentor Ave., Mentor, OH. 44060. In lieu of flowers, contributions may be made to the Charles M. Frank Music Education Fund through the Lakeland Foundation. https://bit.ly/35KSeBV

The family of Charles M. Frank created this Life Tributes page to make it easy to share your memories.

Send flowers to the Frank family.