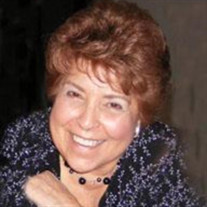 Grace Richards, 84, of Concord Township, passed away Sunday, March 13, 2022. She was born December 20, 1937, in Cleveland to the late Anthony and Angela Ruggeri. After attending Ursuline College, Grace was an elementary school teacher in the 1960’s at Christ the King in East Cleveland. It was there that she met the love of her life, Dan, whose sister, Mimi, was a teacher in the classroom across the hall. Grace lived by the motto “Live, Love, Laugh.” She was a constant source of joy and love for her husband, her three sons, their wives, her grandchildren, her brother and his family, many loving aunts, uncles, cousins, nieces, nephews, and their families as well as countless friends. She was known as “Mom,” “Grandma Grace,” and “Aunt Grace” to many more than her own family. In the 1970’s and 1980’s she and two of her sisters-in-law (Mimi and Ann) founded The Richards of Candlestick Lane, makers of handcrafted miniatures and dollhouse furniture. Their works were featured in magazines and were sold around the world. In the late 1980’s, she was a co-owner of Vignettes, a popular home furnishing and interior decorating store located in Eaton Collection. Her civic involvement included Mentor Junior Women’s Club, Service League, and the Lake County History Center, where she authored and performed in productions about women’s suffrage and the lives of the first ladies of the United States and where she taught a class on Native American history. She was also very involved with the Lake County Music and Drama Club, where she raised scholarship funds for children in the community. Grace was a great Italian cook. She compiled a cookbook containing many cherished recipes, including the family cannoli recipe. For over twenty-five years the family has gathered the week before Christmas to make that recipe on what is affectionately referred to as “Cannoli Day.” Grace will be deeply and forever missed by her survivors who include her husband of 59 years, Daniel F. Richards; sons, Daniel A. (Amy), Christopher J. (Karen), and Matthew J. (Jorianne); grandchildren, Sarah, Benjamin, and Lily; brother, Robert (Jo Ann) Ruggeri and many nieces, nephews, and a large, loving extended family. Private family services are being held. The funeral mass will be livestreamed and can be viewed at noon, Saturday, March 19, 2022, under the livestream tab at the church website: www.sjvmentor.org A commemoration celebration will be held at a date to be determined. In lieu of flowers, contributions in memory of Grace may be made to the Lake County History Center: (440) 639-2945 or mail to 415 Riverside Drive, Painesville, Ohio 44077. Arrangements entrusted to the Brunner Sanden Deitrick Funeral Home & Cremation Center, 8466 Mentor Ave., Mentor, OH 44060. Offer condolences at www.brunners.com

Grace Richards, 84, of Concord Township, passed away Sunday, March 13, 2022. She was born December 20, 1937, in Cleveland to the late Anthony and Angela Ruggeri. After attending Ursuline College, Grace was an elementary school teacher in the... View Obituary & Service Information

The family of Grace Richards created this Life Tributes page to make it easy to share your memories.

Send flowers to the Richards family.