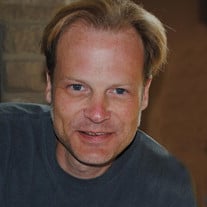 Gregory Gordon Marlough, age 51, of Mentor, Ohio, passed peacefully surrounded by family on Tuesday, July 13, 2021, at Cleveland Clinic in Cleveland, Ohio, after a 6 year battle with Cancer. He was born the second of four children, on May 27, 1970 in Cleveland, Ohio to Gordon and Aldona Blewett. Greg graduated from Mentor High School. He received his bachelors degree from the University of Cincinnati and attended Ohio University in Athens, Ohio. He fell in love with the laid back, small town feel in Athens and decided to make it his home for nearly 20 years before returning to Mentor in 2015. In Athens, he was a substitute science teacher at the local schools, an active member of the AmeriCorps, and a mechanic at Sundown Garage. He truly was the jack of all trades. His greatest joy and fulfillment in life was to help others. He was a mentor and support line to many, and a friend of Bill’s for the past 30 years. Greg loved conversation and cherished the time he spent with family, friends and neighbors. He was an avid reader, enjoyed playing and listening to music, watching documentaries and a handyman. Greg enjoyed the outdoors; afternoon naps on the hammock, working in the yard, curling up in the sun with a book. He felt connected with nature and enjoyed feeding and watching the wildlife all around him. Greg was preceded in death by his father, Gordon “Don” Blewett and aunt, Laimute Ledenican. Greg is survived by this mother, Aldona (Karuza) Marlough; brother, Jeffrey (Yukimi) Marlough; sister, Debbie (David) Usnik; brother, Tom (Catie) Marlough; aunt, Heather Strauss; uncle, Jack (Shirley) Blewett; uncle, Alan Ledenican; stepmother, Kathy Blewett; as well as his nieces and nephews who he always spoke so highly and proudly of; Naomi, Ari and Claire Marlough; Alexandra and Evan Usnik. The family will receive friends from 1:00 - 4:30 pm Monday, July 26, 2021 at the Brunner Sanden Deitrick Funeral Home and Cremation Center, 8466 Mentor Ave., Mentor, OH 44060. A memorial service will be 4:30 pm Monday at the funeral home. Please offer condolences at www.brunners.com

Gregory Gordon Marlough, age 51, of Mentor, Ohio, passed peacefully surrounded by family on Tuesday, July 13, 2021, at Cleveland Clinic in Cleveland, Ohio, after a 6 year battle with Cancer. He was born the second of four children, on May 27,... View Obituary & Service Information

The family of Greg Marlough created this Life Tributes page to make it easy to share your memories.

Send flowers to the Marlough family.