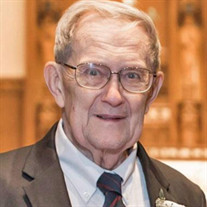 Howard O. “Bud” Scott, age 89 of Willoughby, passed away December 17, 2021 at the Fairmount Health Center at Breckenridge Village in Willoughby. He was born May 15, 1932 in Kirtland, OH. Bud was a 1950 graduate of Mentor High School, and after working full-time and attending night school, graduated in 1961 with a Bachelor in Business Administration from Fenn College (Cleveland State University). Bud had a 37-year career with Diamond Alkali/Diamond Shamrock, starting out in the mailroom and rising over the years to become Manager of Purchasing and Credit, followed by 9 years in management at Metal Coatings International prior to retiring in 1996. Perhaps Bud’s most meaningful and rewarding work experience was with the City of Willoughby Hills, where he served from 1969 to 1984 as a volunteer fireman and paramedic, earning the rank of Lieutenant. Once retired, Bud did anything but rest, having a strong desire to give back. He became a volunteer for The Cleveland Clinic, serving for over 10 years at the Willoughby Hills Family Health Center and being awarded “Volunteer of the Year.” His genuine interest in people and sociable nature made him especially well-suited for this job, one that he took to heart and greatly enjoyed. Bud’s sense of fun came through in his volunteer work at Lake Farmpark, especially at Halloween! Outside of work, Bud had a multitude of interests and hobbies including travel, boating, cruises, playing cards, solving any type of puzzle (but especially Sudoku), fixing anything that happened to be broken around the house, collecting coins and stamps, and his lifetime “game” of closely following and actively trading on the stock market. An avid music lover, Bud had a particular affinity for Sousa marches (especially “The Stars and Stripes Forever”) and the Chardon Polka Band! Bud will be remembered for his sharp and active mind and his endless curiosity and interest in the world around him. Most of all, Bud’s love for and dedication to his family, including extended family in Finland, will be his enduring legacy. A devoted husband, cherished father, beloved Grandpa, he is survived by his wife of 67 years, Esther (nee Tuuri); son, David H. (Beth) Scott of Louisville, KY; daughters, Susan Meeker of Wellesley, MA and Joanne (Scott) Spencer of Fulshear, TX; grandchildren, Kara and David A. Scott, Stacey and Katharine Meeker, Haley (Landon) Huckins and Andrew (Madeline) Spencer; great-grandchildren, Kason and Rylan Huckins; sister, Norma Winter; sister-in-law, Ann Tuuri; and Bud’s cat Mindy. He was preceded in death by his parents, Eugene and Melva Scott; brother, Rollin Scott and brother-in-law, Walter Robert Tuuri. A private family service will be held at Advent Lutheran Church, Mentor, OH. A live stream of the service will begin at 11 am on Thursday December 23, 2021, please follow this link, www.adventmentor.org/services. The interment will be in Mentor Cemetery. Arrangements entrusted to the Brunner Sanden Deitrick Funeral Home & Cremation Center, Mentor, OH. Send flowers and offer condolences at www.brunners.com.

The family of Howard O. "Bud" Scott created this Life Tributes page to make it easy to share your memories.

Send flowers to the Scott family.