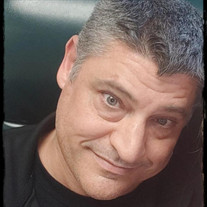 James Floyd Guynn, age 54, passed away on Thursday, January 14th 2021, at 1:30 p.m. James, also known as Jimbo, Peewee, Jimmy Floyd, and Forrest was diagnosed with Stage IIII Metastatic Bladder Cancer in September of 2019. He was and still is a much loved husband, father, son, brother, grandfather, and friend. Everything he did, he worked hard at. He was a respected Electrical Engineer at Lincoln Electric, where he loved his job and all his co-workers. Even during the year and a half he spent undergoing chemotherapy, he continued to work every day without complaints because that was just the type of man he was. He was born in May of 1966. He grew up on family land, where he stayed all his life and eventually passed. On the property lived his entire immediate family- his parents, sister, uncle, and cousins were always close by. He loved his family more than anything else in his life, and his greatest joy was maintaining the family property where he built his own home to raise his children. At any given day, he could be found farming on his tractor, grilling on his Big Green Egg, bird-watching, tending to his apple trees, and cuddling with his dog, Addie. He was an avid country music listener. He was a Browns fan and if he wasn’t wearing a Browns outfit, then he was wearing camouflage, or both at once. He attended too many Browns games to count. In August of 1993, he married his best friend and mother of his children, Trish. Trish remained his favorite person throughout his entire life. Their love was from a fairytale. They celebrated 27 years of marriage together, and their love only grew as the cancer progressed. Every step of the way, Trish was right there with him, through sickness and health. In December of 1996, he and his wife welcomed their triplets Kaitlyn, Liz, and Jakob into the world and family. He was the type of dad that made a childhood memorable. Jimbo was a constant role model, he was stable and earnest in all the right ways, yet soft and sweet. He loved his son Nicholas like his own blood. He was a family man to his core. Because of his role as a father and husband, he expressed fulfillment and happiness at how he lived his life and was able to make peace with his diagnosis early on. On October 19, 2005, Jimmy gave the gift of life to his mother, Filamena Guynn, through a kidney donation. Today, he lives on inside of her. He loved his mother so much, and she was never far from him. This act of selflessness highlights the type of man he was. He would do anything for his loved ones. Even near the end, he spoke about being glad he could donate to her while his body was healthy. One of his greatest joys was spending his days at the Mentor Lagoons, carting his family through Lake Erie on one of his boats. He would spend hours towing a raft for his kids so they could tube the wake from his boat. He loved to fish. If you heard Kenny Chesney on the radio, you knew Forrest was near. He fought cancer with strength and grace. A lesser man would not have fought the fight that Jim did. He never complained that he was in pain, never stopped smiling until the very end, and always remained optimistic above all. He loved his life, and he gave cancer a run for its money. He worked hard all his life, and this was approached no differently. Now, it is time for Jimmy to have some much deserved rest. He passed away peacefully in his sleep, in his own bed in his own home with his beloved Trish and Jake by his side. His other children were not far. Some of his last words he could speak were “I love you too.” His passing tore a hole into our hearts that will never be filled. He will be missed every single day. His family wishes that he could have stayed for another 40+ years, but takes solace in the fact that he is now in Jesus’ loving arms, and is finally relaxing in Heaven, with his dad and others who passed before him. Somewhere, he is awash in a golden light, basking in the glory of strong faith and a life well lived. Rest easy Jimbo, until we meet again. James is survived by his wife, Trish Guynn: Children, Kaitlyn, Liz, Jake, and Nick Guynn; Grandson, Dylan Stenger; Mother, Filamena Guynn; Sister, Deb Mills; and many other loving family members and friends. He was preceded in death by his father, James C. Guynn. The family will receive friends to celebrate Jim’s life from 4:30 - 7:30 p.m. on Friday, January 22, 2021 at the Brunner Sanden Deitrick Funeral Home & Cremation Center, 8466 Mentor Ave., Mentor, Ohio 44060. A funeral service to conclude the gathering will begin at 7:30 p.m. on Friday at the funeral home. In lieu of flowers, contributions may be made in care of the family so that they can donate and help other families who are in need during their battles with cancer. Please offer condolences at www.brunners.com.

The family of James F. Guynn created this Life Tributes page to make it easy to share your memories.

Send flowers to the Guynn family.